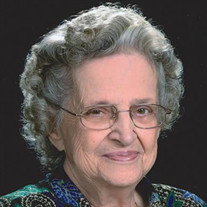 All services are private. Della Roselene Sheer Holdsworth was born August 17, 1927 in Audubon, Iowa to Roscoe and Amanda Peterson Sheer. She was baptized on September 4, 1927 and confirmed on March 29, 1942 in Our Savior Lutheran Church in Audubon. She attended County School and graduated from Audubon High School in 1945. On September 4, 1946 she married Vernon Holdsworth in Our Savior Lutheran Church in Audubon. To this union eight children were born. They farmed for about twenty-five years. They moved to Irwin and later moved to Perry where they owned and operated the D&D Motel. Della was also a cashier at the Ben Franklin Store for eight years. They moved to Boone where they managed a 60 unit high rise for Senior Citizens for five years. Then moved to Harlan where they managed an apartment building. A year and half later they moved to a house on 6th Street in Harlan where they lived for sixteen years then in 2010 they retired and moved to Westridge Apartments. Many friends were made in their moves, Della has always belonged to the Lutheran Church. She enjoyed crocheting and her family. When the children were small she always had a large garden, canning fruit and vegetables for the year ahead. She also made clothes for the children when the children were small. Della died on Friday, January 14, 2022 at Elm Crest Retirement Home in Harlan, attaining the age of ninety-four years, four months, and twenty-eight days. Preceding her in death are her parents, husband, son Kenneth in infancy, sons-in-law Randy Swensen and Denny DeWild, brother Edwin and his wife Phyllis Sheer, sisters-in-law Betty and her husband Les Boyens, Virginia and her husband Gilbert Mundt, and brother-in-law Merle and his wife Opal Holdsworth; great granddaughter Sydney Carpenter. Those left to cherish her memory are her children Linda (Alan) Kuhlmann of Charter Oak, Iowa; Don (Pat) Holdsworth of Harlan, Iowa; Connie (Jerry) Ahrenholtz of Defiance, Iowa; Tom (Julie) Holdsworth of Oak Grove, Missouri; Colleen (Roger) Andersen of Harlan, Iowa; Becky DeWild of Shenandoah, Iowa; Carol (Tim) Whittaker of Letts, Iowa; 25 grandchildren; 53 great grandchildren; 3 great-great grandchildren.

All services are private. Della Roselene Sheer Holdsworth was born August 17, 1927 in Audubon, Iowa to Roscoe and Amanda Peterson Sheer. She was baptized on September 4, 1927 and confirmed on March 29, 1942 in Our Savior Lutheran Church in... View Obituary & Service Information

The family of Della Holdsworth created this Life Tributes page to make it easy to share your memories.

All services are private.

Send flowers to the Holdsworth family.