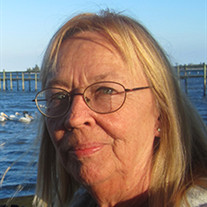 Debra Lynn Martin was born on June 25, 1950 in Denison, Iowa to John (Jack) Rademacker and Lois (Podey) Eckermann . Debbie graduated from Missouri Valley High School in 1968. Debbie loved school and found it hard to say no to her younger brothers when they asked her to write their book reports. On May 6, 1978 Debbie was united in marriage to the love of her life, Merrill Martin of Harlan, IA. Debbie and Merrill were foster parents for several teenagers. One became their daughter, Teresa Clay of Harlan, IA. Debbie and Merrill were by each others side until Merrill's death. They enjoyed spending time golfing, camping and being with family and friends. They also enjoyed working side by side managing the Harlan North Golf Course and owning and running the Zodiac Bar in Harlan. In 1994 Deb's love for the Florida sunshine took them on another adventure where they managed an oceanside motel. In 2000 they became the managers of a retirement community in Sebastian, FL where Merrill passed away in 2004. Debbie continued to manage the community until she retired in 2008. Debbie loved to watch documentaries especially those concerning paleontology, Egyptian ruins and history. She also loved any old TV shows but Perry Mason and the Lone Ranger were her favorites. She was a lifetime member of the VFW Auxiliary Post 10210 in Sebastian, FL and a member of Living Lord Lutheran Church in Vero Beach, FL where she served on the Alter Guild for many years. Debbie's true passion was her family. She was a protector, mentor, best friend and confidant, no one messed with Deb's family! Debbie was diagnosed with cancer in May 2019. She was an inspiration to everyone around her with her bravery and positive attitude until the end. She gained her angel wings, at her home, on December 12, 2021 with her sister Tookie by her side having attained the age of 71 years, 5 months and 17 days. Debbie was proceeded in death by her husband, Merrill, her parents and step father, August (Gus) Eckermann, brothers Jim, John and Randy Rademacker, sisters Janice Langholz and Carol Ann Androy. She is survived by her sister, Tookie Smith of Sebastian, FL, brothers, Jeff (Loretta) Rademacker of Lincoln, NE, Jason Eckermann of Harlan, sister, Marlyce Schraeder of Denison, IA, chosen daughter, Teresa Clay of Harlan, IA, her long time Florida friend, Margaret Ciampa of Sebastian, FL, many special nieces, nephews, cousins and many other dear friends.

The family of Debra Lynn Martin created this Life Tributes page to make it easy to share your memories.

Send flowers to the Martin family.