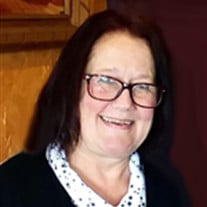 Deborah Marie Hanson, daughter of James and Karen (Jackson) Gorman was born December 14, 1962, in Denison, Iowa. She attended Denison High School, graduating in 1981. She then attended Iowa State University in Ames, Iowa, before moving back to Denison. In 1983, Deb met Wade Hanson. They were united in marriage on April 27, 1985, at Grace Lutheran Church in Watertown, South Dakota. Two children were born to this union: Britney and Evan. The family lived in several places throughout the Midwest, as Wade worked at Hy Vee and Deb worked various jobs and raised their children. Deb later settled in Storm Lake, Iowa, where she eventually obtained her associate's degree from Iowa Central Community College. Deb loved her children. She enjoyed music and spending time with friends and family. In 2020, Deb suffered a traumatic brain injury. She died on Monday, March 22, 2021, at Dunlap Specialty Care in Dunlap, Iowa. At the time of her death, she was fifty-eight years, three months, and eight days old. She was preceded in death by her mother Karen Gorman, and grandparents Edward and Lillian Jackson and Hugh and Louise Gorman. She is survived by her children Britney and her husband Josh Randolph of Breda, Iowa; Evan Hanson of Lennox, South Dakota; grandchildren Seth Randolph, Zachary Randolph, and Jackson Randolph; father James Gorman of Arizona; siblings Michael Gorman and his wife Jackie of Arizona; Kim and her husband Curt Heltemes of Arizona; nieces and nephews; other family members, and friends.

The family of Deborah M. Hanson created this Life Tributes page to make it easy to share your memories.

Send flowers to the Hanson family.