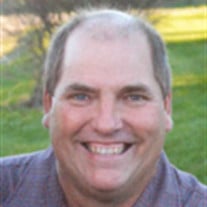 Dean Leonard Klein, son of Otto and Margaret (Kramer) Klein, was born December 3, 1962 in Harlan, Iowa. He was baptized at St. Mary’s Catholic Church in Panama, Iowa, where he remained a life long member. He graduated from Harlan High School at the midterm of 1981, as he had work to be done. Right after graduation, Dean farmed with his parents Otto and Marge, and his brother Larry. He raised many, many hogs and had a cow/calf herd for many years with Larry. They also sold Mycogen seed corn and beans for many years. Before meeting Connie, he took his first vacation ever on a Mycogen seed tropical cruise with Larry, sharing a one bed cabin. In 1998, Dean met Connie Holtz, on a trip to Iowa State Fair with Jerry and Sharon Hoffmann. He was being set up and didn’t even know it. The first thing they did together was go down the Giant Slide at the fair and there was no turning back for either of them. Dean married Connie Ann Holtz on June 19, 1999 at St. Mary’s Church in Panama. The arrival of his children, Megan and Brian, filled his life in many ways he couldn’t imagine. He was a very proud dad and loved to spend time with his family. Some family favorites were fishing and vacations. With farming, he was quite busy, but made time to attend school events, Girl Scouts, Boy Scouts, sports, band, piano, any activity the kids were involved in. He was a member of the St. Mary’s Parish, Panama Volunteer Fire Department, Shelby County Pork Producers, Shelby County Fair Board, Panama Community Chorus, and JR Steppers Dance Group. He enjoyed so many good times and memories with friends, especially playing cards and getting that lucky hand. During his years on the farm, he was always trying to fix things or improve things, “It ain’t made right” he would always say. He was our big guy and our fix-it man. There is so much more to say about Dean, that it all cannot be written down to put it simply, he always had a big smile and a big heart. Dean died on Sunday, August 25, 2019 at Myrtue Medical Center in Harlan, Iowa, attaining the age of fifty-six years, eight months and twenty-two days. He was preceded in death by his father Otto and his sister Irene Buckley. He is survived by his wife Connie Klein and children Megan and Brian Klein all of Panama, Iowa; his mother Margaret Klein of Harlan, Iowa; siblings JoAnn (Gary) Kenkel of Harlan; Larry Klein of Earling, Iowa; Edna (Mike) Keenan of Storm Lake, Iowa; Leona (Ed) Grace of Omaha, Nebraska; David (Sara) Klein of Omaha; brother-in-law Rex Buckley of Harlan; nieces and nephews; other family members and many, many friends.

Dean Leonard Klein, son of Otto and Margaret (Kramer) Klein, was born December 3, 1962 in Harlan, Iowa. He was baptized at St. Mary&#8217;s Catholic Church in Panama, Iowa, where he remained a life long member. He graduated from Harlan High... View Obituary & Service Information

The family of Dean Leonard Klein created this Life Tributes page to make it easy to share your memories.

Send flowers to the Klein family.