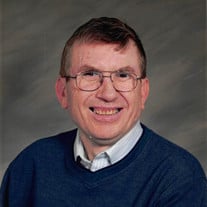 *A Private Family Graveside Service will be held at a later date.* Dean Leroy Adams, born on May 15, 1948, passed away March 30, 2020. Dean was born to Victor Lee Adams and Harriet Pamela (Smith) Adams in Manilla, Iowa. The family later moved to the Denison, Iowa area in Crawford County where Dean attended start up Special Education class. Dean continued in the class until his graduation in 1965. Dean then lived in a couple different homes before finding a real home at New Hope Village in Carrol, Iowa. He loved living in the cottage house at New Hope and worked at shredding paper, something he enjoyed doing. His dad purchased a three wheel bike for Dean to ride around the complex of cottages. One thing he enjoyed was giving rides to his younger nieces and nephews in the wagon behind the bike, laughin’ all the time. Other things Dean enjoyed were making latch hook “rugs” which his mom would make into pillows to give away and he enjoyed putting together picture puzzles. When you visited Dean, your side trip included a stop at McDonalds for a cheeseburger, fries, and a shake to go. But you would not go to the park to eat your lunch, you would find a place to park by the train tracks to see the freight trains go by while enjoying your lunch. As the residents of the cottages were migrated to group homes, Dean moved to New Hope in Carroll, Iowa. While in Manning, he worked at sorting small mixed parts into bins of similar items. After his mother moved to Sioux City, Iowa, Dean also moved to Sioux City to retire at the Mid Step Home. Remember Dean enjoyed shredding paper? He got a shredder for his room and a box to keep shredding paper. The box was fixed up so he could pull the shredded paper down the hall, behind his wheelchair, to the recycling bin. Dean was preceded in death by his Father and Mother, stepfather Zane Gray, brother Richard Adams and infant brother Darrel Adams. Those left to cherish his memory include his brother Don Adams and wife Sandy of Bartlesville, Oklahoma, sister Joyce Chase and husband JT of Sioux City, Iowa, sister-in-law Glenda Adams, and many nieces and nephews. The family requests in lieu of flowers, donations to be made to Carroll New Hope group home.

The family of Dean LeRoy Adams created this Life Tributes page to make it easy to share your memories.

*A Private Family Graveside Service will be held at a later date.*

Send flowers to the Adams family.