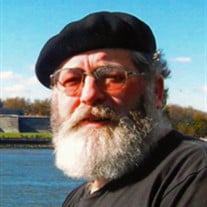 David Samuel North was born October 11, 1959, in Winnipeg Manitoba, Canada. David moved to Iowa at the age of eleven. At the age of six, David told his father exactly what he wanted to be when he grew up. He told his Dad that he wanted to be a knife maker, learn martial arts, and work in Chinese Medicine. David helped on the North family mushroom farm for many years. If was then he started learning martial arts. With Steve Humphries as his trainer, David earned a 19th degree black belt. David then began training Gary Cole’s officers in defensive techniques. David was quick and accurate with his martial arts skills. Once David learned how to use the martial arts and the points of the body that were targeted, he used that knowledge to get into the healing arts. David used Chinese Accu-Points to heal people who were hurting. When he started working on people in the 80's in his basement it grew into his beautiful healing arts center. David spent 40 years of his life dedicated to the holistic healing of the mind, body, and spirit of those in need, day or night seven days a week. During that time, David touched many lives and their following generations. David was a true pioneer in the holistic healing in Iowa. In between all of his work, David enjoyed a good game of chess, whether it was with a client he had just helped, or with people all around the world on his computer, or with his brother Dan who was himself a master chess player. He also spent many hours cycling around Harlan, Iowa and in Nebraska on his recumbent bicycle. David and his wife, Janet would spend Saturdays in Lake Manawa cycling 25-30 miles. He could have gone farther, but Janet would have needed medical care. When not on a bike or playing chess, David was tending to his flower garden and enjoying the many different varieties of birds in his lovely garden. David also enjoyed woodworking and was thankful for having a brother he called Ace (Andrew), who could make any type of furniture he wanted and helped David learn how to use the tools of the trade. All of his siblings Bill, John, Daniel (the Bull), Andrew (Ace), and Ruth all held a special place in David’s heart. David accomplished everything he set his mind to, and in the end, fulfilled all that he wanted to become. In 1998, David first met Janet; they became friends. Years later David and Janet met again, only this time for good. David found the love of his life and together they became a perfect healing duo. David’s search for someone to love ended when he dedicated his life to her and she to him for the last eight years of his life. Together they enjoyed a good life with their two Siamese cats Simon and Luther. The Lord our Father was always first in his heart. David came to the Lord as a young boy. David always spoke the Word to those who came to him and opened the eyes of those he healed. Truthful words stand the test of time. David joined his Lord and Savior on Friday, June 26, 2020. He was preceded in death by his parents Roy P. and Marion North.

David Samuel North was born October 11, 1959, in Winnipeg Manitoba, Canada. David moved to Iowa at the age of eleven. At the age of six, David told his father exactly what he wanted to be when he grew up. He told his Dad that he wanted to... View Obituary & Service Information

The family of David North created this Life Tributes page to make it easy to share your memories.

Send flowers to the North family.