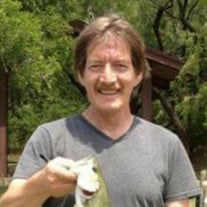 David Herbert passed away in Fullerton, Nebraska on April 18, 2021. After a brave and courageous battle with cancer. At the age of 62 years 8 months and 21 Days. David was born to Marlin and Betty (Bales) Herbert in Apple Valley, California. On July 28th, 1958. David grew up in Chino, California and moved to Denison, Iowa in 1971 . Where he met the love of his life Bonnie Marie Herbert. They were united in marriage in August 1979. David and Bonnie were blessed with three children. Rita Marie (Nathan) Lucero of Fort Worth, Texas. His sweetheart Erica Rose Ellis of Fremont, Nebraska. David Timothy (Betsy) Herbert of Fullerton, Nebraska. David's first born son Jeff Segebart of Tea, South Dakota. Also had a special place in his fathers heart. David worked for over 30 years at IBP and Farmland. He retired at the age of 61 years old unfortunately he was diagnosed with cancer a year later. David lived in Fort Worth, Texas with his daughter Rita and her family. Where they would explore and enjoy the beauty of Texas. He was a lifelong Dallas Cowboys fan. He enjoyed watching boxing, loved to fish and hunt. David could never turn down an opportunity to dance to county music in the kitchen. David could also fix anything with duct tape and a paper clip. He fascinated many with his amazing inventions. He was what you called a modern day MacGyver. David was preceeded in death by his parents. Sisters Cora Sue Kelly of Denison, Iowa. Sally Ann Herbert, infant. Sister in law Theresa Mayhew of South Sioux City, Iowa. Brother Marlin Hebert Jr. Two nieces Stacey and Tracy and three nephews Keith, Jared and Ernie. Those remaining to cherish his memory are his children. Brothers Floyd (Lila) Herbert of Schleswig, Iowa. James Warren Herbert of South Sioux City, Iowa. Robert Arthur (Beth) Herbert of Denison, Iowa. Sisters Joyce Ann (Don) Lafrentz of Wikieup, Arizona. Marlene Kay Herbert of Council Bluffs, Iowa. His grandchildren Triston (Alyssa) Ellis of Atlanta, Georgia. Paxton, Emma and Bowie Ellis of Fremont, Nebraska. Twins Mila and Sébastien Lucero of Fort Worth, Texas. Colby, Aiden and Ava Herbert of Fullerton, Nebraska. And many other family member and friends. After cremation David will be entrusted to his four children. A celebration of life fishing and grilling fellowship in the Denison area, date to be announced. Until then grab a cold one, your pole and go fishing. Peace.

David Herbert passed away in Fullerton, Nebraska on April 18, 2021. After a brave and courageous battle with cancer. At the age of 62 years 8 months and 21 Days. David was born to Marlin and Betty (Bales) Herbert in Apple Valley, California.... View Obituary & Service Information

The family of David Herbert created this Life Tributes page to make it easy to share your memories.

David Herbert passed away in Fullerton, Nebraska on April 18,...

Send flowers to the Herbert family.