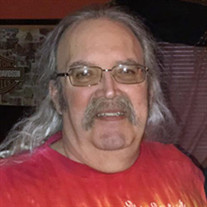 David Michael Andersen, son of Gerald “Andy” Andersen and Gladys (Ohlinger) Andersen, was born on January 31, 1957 in Portsmouth, Iowa. He attend grade school in Defiance and Westphalia. He graduated from Irwin High School. He attended Iowa Western Community College receiving his degree in auto mechanics. Hairy was united into marriage with Teresa Coon on December 11, 1992 in Harlan. They were married for 14 years before separating for a couple years and then reuniting in God’s Plan for marriage again on September 19, 2009. Teresa and Hairy celebrated their most recent anniversary by going on vacation to Las Vegas and seeing Teresa’s favorite performer, Eric Clapton. Hairy was excited to share this experience with his wife. A highlight from their trip was visiting the Hoover Dam and standing on the state line kissing each other in Nevada and Arizona. Hairy was a great supporter of his wife who recently began school to pursue nursing. Hairy often read books with Teresa and would spend time helping her navigate the school life. Together, Hairy and Teresa had two fur babies, Prince and Max, who were entertainers of his day. If you’d seen Hairy driving with the dogs, they were upfront with heads out the window, and Teresa was somewhere in the backseat. Hairy was the second born son out of five. Hairy loved going on outings with his family growing up. One of his favorite memories were fishing trips with his mom, dad, and brothers. He recently reminisced about the ‘51 Chevy that they took the back seat out of so they could go trapping with their dad. His hobbies included working on the 1970 Camaro and taking it to car shows with his brother, Bush. He spent many hours on roundtrips with his brothers riding his 1974 Harley. He was an excellent sewer, taught by his mother, and could patch up anything brought to him by friends and family. Family to Hairy extended beyond blood. If you were his friend, you were his family. Hairy became blessed with two wonderful children, Jessica and Leo, that he considered his own and aided in raising them. His greatest joy was becoming a papa to Kinzley, Laney, and Chay. One of his favorite things to do was play Barbies with Kinzley and bake cakes with her and the neighbor girls. He loved his girls more than the world and his contagious smile will always shine through them. Hairy was admired for his constant positive attitude no matter what was happening. His faith in our Lord and Savior was a constant reminder to continue to stand on the promises of the Lord. Spending time with family was always his number one priority. He never missed a chance to call or text on a special day or just to say hi. He will be remembered at family functions as being a taster of all treats and never leaving without saying, I love you. Hairy died on Friday, April 3, 2020 at his home in Harlan, attaining the age of sixty-three days, two months, and three days. In addition to his parents, he was preceded in death by his grandson Lane David Snethen, brothers William Andersen and Troy Coon. He is survived by his wife Teresa Andersen-Clay of Harlan; children Leo Dagel of Sibley, Iowa; Jessica (Zachary Snethen) Dagel of Portsmouth, Iowa; grandchildren Chay Snethen, Kinzley Snethen, Laney Snethen; brothers Dennis “Shorty” (Ann) Andersen of Harlan; Mike (Kathy) Andersen of Harlan; Marvin “Bush” (Linda) Andersen of Harlan; Mike (Tina) Coon of Council Bluffs, Iowa; nieces and nephews; other family member and many friends. A Memorial Service for David "Hairy" Andersen will be held at a later date. Burial will be at Harlan Cemetery in Harlan, Iowa. In lieu of flowers memorials can be directed to Teresa Clay, 1706 6th Street Harlan, Iowa 51537

The family of David "Hairy" Andersen created this Life Tributes page to make it easy to share your memories.