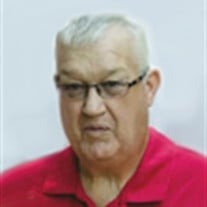 Darvin Wayne Lund, son of Wayne and Alyce Mae (Doonan) Lund was born on July 18, 1953 in Harlan, Iowa. He was baptized at First United Methodist Church in Harlan. Dar grew up on the family farm outside of Harlan and attended school in Harlan graduating with the class of 1971 from Harlan Community High School. While in school, Dar was very active in both 4-H and FFA where he began his work with sheep. After graduating high school, Dar continued to help on the family farm as his dad had died when Dar was only 12 years old. He loved the farm and tending to the livestock. On June 14, 1975, Dar was united in marriage to Joyce Roenfeld at the Bethlehem Lutheran Church outside of Jacksonville, Iowa. After their marriage, they made their home on the Lund family farm where they raised their three daughters: Tina, Shelli and Amy. Dar also sold seed for Wilson Hybrid and drove the delivering truck for Hineline Home Furnishings. Although the farm took a lot of Dar’s personal time, he always had time to support his daughters in their school and extracurricular activities, especially softball and showing their sheep at the county fair, Iowa State Fair and at Ak-Sar-Ben in Omaha, Nebraska. Dar volunteered and served on the Harlan Little League Board for many years in an effort to increase the participation in the girls softball program, and president on the board from 1995 to 2000. Dar and Joyce were also long time members of the United Methodist Church in Harlan. He was an avid bowler and enjoyed watching westerns, especially Saddle Up Saturdays. Dar looked forward to every fall, when his son-in-law Kirk and friends from Northwest Iowa and Minnesota would make their annual trip to deer and pheasant hunt. Christmas was also a favorite time of year for Dar, he loved the tradition of seeing his family together. He especially loved being a dad to his daughters and a papa to his grandkids. After the death of Joyce on August 30, 2001, Dar remained on the family farm but started to slowly cut back on the amount of farming he did each year. In addition to farming, Dar sold used tires and worked with the lambing operations at Weihs Farms outside of Harlan as well as many other odd jobs. He was a huge supporter of the Shelby County Fair and was a past board member. In addition to his parents and wife, Dar was preceded in death by his sister Nola Lund and a grandson, Hunter Genck. He is survived by his daughters: Tina and her husband Kirk Dekker of Sheldon, Iowa; Shelli Lund of Owatonna, Minnesota and Amy and her husband Derek Genck of Lawton, Oklahoma; grandchildren: Kourtney Dekker, Peyton Dekker, Kieley Genck, Emi Genck, Bentley Genck and Karson Lund; mother-in-law Angela Roenfeld of Harlan, Iowa; cousins Tom Lund and his wife Linda of Kila, Montana and Gen and her husband Al Wede of Atlantic, Iowa; other relatives and many friends.

Darvin Wayne Lund, son of Wayne and Alyce Mae (Doonan) Lund was born on July 18, 1953 in Harlan, Iowa. He was baptized at First United Methodist Church in Harlan. Dar grew up on the family farm outside of Harlan and attended school in Harlan... View Obituary & Service Information

The family of Darvin "Dar" Lund created this Life Tributes page to make it easy to share your memories.

Send flowers to the Lund family.