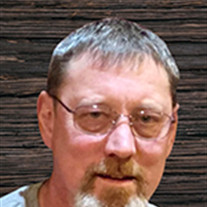 Darren Anthony Pauley, son of Kenneth and Eileen (Schleimer) Pauley, was born April 6, 1966 in Harlan, Iowa. As a child, Darren attended St. Mary’s Catholic School until 8th grade. He then went to Harlan Community High School where he graduated with the class of 1984. After high school, Darren attended Iowa Western for automotive mechanics. Starting when he was a teen, Darren volunteered to mow the Panama baseball field. He continued doing that until his mid 30s. Right when Darren graduated high school, he worked as a janitor at St. Mary’s Catholic School in Panama. Then he worked at IBP, a food processing plant in Council Bluffs, Iowa and later transferred to Denison, Iowa. After that, he switched to Farmland in Denison where he became a supervisor. His hobbies included demolition derby’s, restoring cars, camping, fishing, kayaking, cooking & entertaining, yard work, Bud Light, family time, and his grandchildren. Darren’s biggest most recent project the last few years was trying to get his 1971 El Camino Sprint road ready. He always had that “Pauley smile” on his face or a funny comeback for everything said or done. He was the perfect definition of a simple man. Darren was married to Patricia Wilwerding and lived in Panama where they had Cadie and Rachel. He later was united in marriage to Irma Valle and lived in Denison where they had Abraham and Alexander. Darren died surrounded by his family on Saturday, August 14 2021 at Iowa Methodist Hospital in Des Moines, Iowa attaining the age of fifty-five years, four months and eight days. He is preceded in death by his mother Eileen. He is survived by his father Kenneth Pauley of Panama, Iowa; children Cadie (Brett) Weldon of Walnut, Iowa; Rachel (Jake) Oleson of Waukee, Iowa; Abraham Pauley of Denison, Iowa; Alexander Pauley of Denison, Iowa; brothers Kerry Pauley of Panama, Iowa; Brad (Zamira) Pauley of Jacksonville, Florida; and Jason (Annie) Pauley of Des Moines, Iowa; 4 grandchildren; nieces and nephews; other family members and friends.

The family of Darren "Woody" Pauley created this Life Tributes page to make it easy to share your memories.

Send flowers to the Pauley family.