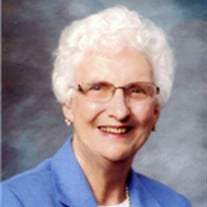 Darlene Ione Heilesen, daughter of Elmer P. and Freda D. (Meyers) Jensen, was born July 12, 1929 on the family farm near Defiance, Iowa in Shelby County. She was baptized at Evangelical United Baptist Church in Defiance on April 13, 1930 and confirmed at United Methodist Church in Irwin, Iowa. She attended school in Defiance and Irwin Schools, she graduated from Irwin Consolidated School in 1945 as Valedictorian at the age of 15. Darlene then attended Commercial Extension School of Business in Omaha, Nebraska and worked for Travellers Insurance Company in Omaha. She returned to Harlan in 1948 and worked for Farmers Home Administration. On January 9, 1949, Darlene was united in marriage to Richard C. Heilesen at the Methodist Church in Irwin, Iowa. Three children were born to this union: Bruce Richard, Becky Jean, and Patty Jo. They lived on the Heilesen Family Farm near Harlan until moving into Harlan in 1998. Darlene was a member of the First United Methodist Church and Martha Circle in Harlan. She served as President of United Methodist Women, President of Church Women United, and Honorary member of MMH Auxiliary and as a board member. In 1948, she joined as a member for 72 y ears to Lebanon Chapter OES of Harlan, where she served as Matron, Grand Chaplain for the State of Iowa in 1977, Mother Advisor Rainbow for 9 years and served on the Rainbow Board, also a member of Grand Cross, Rainbow. She belonged to several bridge clubs, she loved to bake for the family and made each family member several quilts. Darlene and Richard loved to travel. Darlene died at her home in Harlan surrounded by her loving family on Wednesday, May 6, 2020, attaining the age of ninety years, nine months and twenty-four days. In addition to her parents, she was preceded in death by her husband Richard, son Bruce Heilesen, daughter Becky Carver, and brother Keith Jensen. She is survived by her daughter Patty Jo and her husband Don Holdsworth of Harlan, Iowa; son-in-law Lance Carver of Zearing, Iowa; grandchildren Hayley and her husband Steve Sellhorst of Omaha, Nebraska; Tawnya Holdsworth of Harlan; Andrew Carver and his wife Mallory of Ankeny, Iowa; Bailey Heilesen of Harlan; great grandchildren Jacob Birch, Chloe Birch, Waylon Sellhorst, Gatlin Sellhorst, Arielle Sellhorst, and Cameron Carver; siblings Donna and her husband Norman Campbell of Irwin, Iowa; Caryl and her husband Bill McMahon of Irwin; sisters-in-laws Dorothy Jensen of Denison, Iowa; Evelyn Plumb of Kansas City, Missouri; nieces and nephews, other family members and many friends.

Darlene Ione Heilesen, daughter of Elmer P. and Freda D. (Meyers) Jensen, was born July 12, 1929 on the family farm near Defiance, Iowa in Shelby County. She was baptized at Evangelical United Baptist Church in Defiance on April 13, 1930 and... View Obituary & Service Information

The family of Darlene Ione Heilesen created this Life Tributes page to make it easy to share your memories.

Send flowers to the Heilesen family.