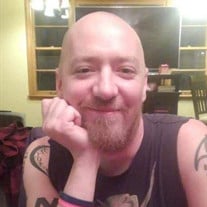 Daniel “Danny” Ryan Pedersen was born on March 29, 1985 in Colorado Springs, CO, to Lee and Pam (Hockel) Pedersen. He was the youngest of three children. He attended school in Colorado until the family moved to Harlan in 1994. Danny continued his education in the Harlan Community Schools and received his diploma in 2003. As a young child, Danny exceled in karate and enjoyed playing football. As Dan grew older, he would frequently be found playing disc golf with his buddies. His children were his pride and joy and he loved spending time with them. Music was a huge part of his life. Danny never turned down an opportunity to road trip across the country with his buddies to attend concerts and have a good time…even attending several meet and greets with his favorite artists! One of his favorite moments was taking Cayden to his first concert, “Stone Sour”. Having self-taught himself to play both the drums and the guitar, Danny was a very talented musician. He was a member of several bands in the area: “Forty Watt Shock”, “Born on Leap Year”, “What Dwells Within”, “Shatterkane”, “Acheron” and “Sistamattix” Being the opening act for “Days of the New” in Peoria, IL was one of his proudest musical moments. His love for music will never be forgotten. Danny had a way of making people laugh. He was a huge Nicholas Cage fan and could often be found wrapped up in his Nicolas Cage blanket. He loved the Carolina Panthers and Denver Broncos. People who follow Dan on social media always looked forward to his “Fat Face Friday” posts and his “Dannyisms”. He was a Blue Fingernails Life advocate and would proudly wear his fingernails painted blue. He was always making people smile and laugh and was the kindest, most non-judgemental person you would ever meet. He made friends with everyone he met and never turned down an opportunity to help a friend. Danny died unexpectedly at his home on Saturday, July 25, 2020, having attained the age of 35 years, 3 months and 26 days. He was preceded in death by his parents, Lee and Pam; his grandfather, Marvin “Butch” Pedersen and his uncle, Roger Hockel. Danny leaves behind his children Cayden and Ayva, both of Harlan; a sister, Jennifer Wagman, and a brother, Ben Pedersen (Leslie) both of Omaha; nieces, Alexi Wagman and Isabella Pedersen, both of Omaha; grandparents, Irma Pedersen of Harlan and Dale and Gloria Hockel of Norwalk; aunts, Shelly (Terry) Saunders of Harlan, Kim Measner of Greeley, CO, Penny Bair of Norwalk, and uncle, Dale (Laura) Hockel of Indiana; and several cousins and other family members. He will be missed by many friends whom he considered family.

Daniel &#8220;Danny&#8221; Ryan Pedersen was born on March 29, 1985 in Colorado Springs, CO, to Lee and Pam (Hockel) Pedersen. He was the youngest of three children. He attended school in Colorado until the family moved to Harlan in 1994.... View Obituary & Service Information

The family of Daniel Ryan Pedersen created this Life Tributes page to make it easy to share your memories.

Send flowers to the Pedersen family.