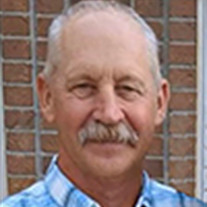 Dan Carl Knudsen was born July 26, 1954 to Lyle and Helen (Johnson) Knudsen in Council Bluffs, Iowa. He grew up on the family farm and began his love of growing crops and raising cattle. He attended Harlan Community Schools and graduated high school in 1973. He ran cross country and was active in band and FFA. He waited a year to further his education as he worked with his father on the farm and was a part of Damascus Road, a music group and ministry that traveled around southwest Iowa. He began his studies at Dana College in Blair, Nebraska, and later transferred to Iowa Western Community College where he earned his degree in agriculture and farm management in 1976. While completing his coursework, Dan lived at home and gained more involvement with managing the farm, raising pigs, feeding cattle, and starting his cow-calf herd. Dan married Lorie Jayne Lebeck at Bethlehem Lutheran Church in Jacksonville, Iowa on August 14, 1977. Together they raised three children, Stefan Daniel, Gregory Lyle, and Katrina Jayne. Dan aspired to build and make a home for his family. He and Lorie moved into the house Dan constructed just after Stefan was born in 1982 and many happy memories have been made there. Dan always encouraged and supported his children with their pursuits and goals. He was so proud of them and loved to see them develop their talents through sports, music, 4-H, FFA, academics, and church involvement. A new sense of pride was evident as his children married and began raising their families. Dan developed a love of hunting from his uncle, Bob Larson, which he passed on to his children and grandchildren. Growing up, his family vacationed in Minnesota with friends, where he loved to water ski and fish. He has taken several hunting and fishing trips with his sons and other family and friends. One of the highlights of the kids' school years was going on FFA fishing trips to Canada. He was always prepared to teach kids and grandkids the enjoyment of fishing and had poles and bait readily available. Dan was baptized and confirmed at Bethlehem Lutheran Church. In 1973 Dan asked Jesus to be the Lord of his life and from then he grew in his faith and began trusting in God's promises for his family. He has been a member of Faith Family Church, formerly known as Abundant Life Church, since its beginning in 1981. Dan and Lorie were able to take a meaningful trip to Israel in 2018 where Dan was baptized in the Jordan River by Pastor Monte Knudsen to further acknowledge his faith and love of Jesus. Dan went to his heavenly home as the result of a tree clearing accident. He worked hard to improve his farm ground. Dan will be remembered for his love of family, farming, and fishing. He is preceded in death by his mother, Helen Knudsen. He is survived by his wife, Lorie, his sons, Stefan and his wife Lori of Hallsville, MO, and Greg and his wife Kerrie of White Oak, IA, and his daughter, Katrina and her husband Seth Lansman of Omaha, NE; by his 7 grandchildren, Evelyn Knudsen, Estelle Knudsen, Lars Knudsen; Macy Knudsen, Wes Knudsen, Lane Knudsen, and Sidney Lansman; his father, Lyle Knudsen of Harlan, and sister, Beth and her husband Howard Lebrecht of Jensen Beach, FL, many uncles, aunts, cousins, nieces, nephews, and friends.

Dan Carl Knudsen was born July 26, 1954 to Lyle and Helen (Johnson) Knudsen in Council Bluffs, Iowa. He grew up on the family farm and began his love of growing crops and raising cattle. He attended Harlan Community Schools and graduated high... View Obituary & Service Information

The family of Dan Carl Knudsen created this Life Tributes page to make it easy to share your memories.

Send flowers to the Knudsen family.