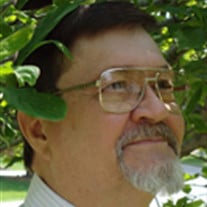 Dale Miller, son of Virgil R. Miller and Lillie Louise Kellogg, was born September 18, 1948 in Council Bluffs, Iowa. Despite kidney problems as a child that nearly cost him his life, he went on to graduate from Tri-Center High School in 1966 and received his Bachelor's Degree in Accounting from Northwest Missouri State in 1970. After college, Dale worked as an accountant for Mutual of Omaha, Saint Joseph Hospital, and Telemarketing Corporation of America. He later worked as a Computer Controller for Jennie Edmundson Hospital and eventually retired from cost accounting as Senior Business Intelligence Analyst for Methodist Hospital in Omaha, NE. Dale took pride in having worked over 40 years in health care. He enjoyed mentoring others and using his ingenuity to solve problems. In 1985, Dale's daughter, Melissa (Meliszma), was born. Throughout her childhood, they resided in Council Bluffs, Iowa, and could often be found bike riding and walking the family dog together around the neighborhood several times a day. Dale was a hard-working man who always put others' needs first. He enjoyed sharing what he knew and making people laugh with his sharp wit. In 2015, he moved to Republic, MO, to be closer to his daughter and her family. His hobbies during retirement included gun collecting, riding around on his Can-Am Spyder, watching old westerns on TV, and spending time with his grandkids. Dale died on October 18, 2019, at Cox South Hospital in Springfield, MO. He battled stage 4 cancer for over a year and reached the age of 71 years and 1 month. He was preceded in death by his parents, his sister Virginia Martens, and his brother Larry Miller. Dale is survived by his daughter Meliszma Phillips and her husband Nick of Billings, MO, granddaughters Ashley and Rosey, siblings Allan Miller of Persia, IA, Russell Miller of Loveland, Colorado, Cindy Hulbert of Council Bluffs, IA, brother-in-law Allen Martens of Council Bluffs, IA, as well as other nieces, nephews, extended family members and friends.

Dale Miller, son of Virgil R. Miller and Lillie Louise Kellogg, was born September 18, 1948 in Council Bluffs, Iowa. Despite kidney problems as a child that nearly cost him his life, he went on to graduate from Tri-Center High School in 1966... View Obituary & Service Information

The family of Dale Miller created this Life Tributes page to make it easy to share your memories.