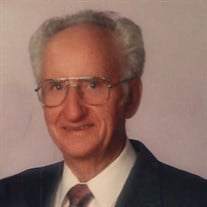 In lieu of flowers, memorial contributions can be made to the American Parkinson Disease Association at the following address: American Parkinson Disease Association PO Box 61420 Staten Island, NY 10306 Dale Crane, the son of Joseph Beldon and Rosa (Swayze) Crane, was born September 4, 1919 on a farm west of Vail, Iowa. While in high school, Dale’s family moved into the town of Vail. He attended Vail High School, graduating with the class of 1938. Dale enlisted in the U.S. Army in 1941 where he served honorably during World War II as part of F-Troop patrolling the West coast. While in Washington, Dale met the love of his life Evelyn Groves, at a USO dance. The two married on November 7, 1943 in Port Angeles, Washington. They were blessed with the birth of five children: Larry, Ron, Dan, Lynn, and Mark. While in the Army, they made their home in Port Angeles, California, Texas, and South Carolina. After his discharge, they returned to Vail to help his brother, Everett, farm. For decades, Dale was the owner of Crane Feed in Vail. He was a hard-working man working on Sundays and holidays, as needed. Dale was a humble man who was never one for show. He was a man who was tougher than nails but had a kind heart. Dale loved to play baseball and softball, including playing on the Vail teams. He also liked to bowl and even sponsored youth bowling teams. Dale was a lifelong member of the United Presbyterian Church in Vail where he was an Elder and a Deacon, a++ member of the Eastern Star, lifetime member of the Masonic Lodge, a 60-year member of the American Legion, and a school board president for the Ar-We-Va School District. For more than 30 years, Dale and Evelyn spent time every winter in California visiting their kids. They loved to travel together. Their last trip was a cruise to the Panama Canal. Dale was not a huggy-kissy type of person, but he married into that type of family. Evelyn meant the world to him. Dale and Evelyn used to argue about who loved who the most, and who should “go” first because they couldn’t live without each other. In 2008, Evelyn and Dale moved to the Reed Place in Denison. After Evelyn’s passing in 2011, Dale remained in Denison. On Saturday, November 7, 2020, Dale passed away, the same day as Evelyn and Dale’s 77th wedding anniversary. He was 101 years old. Dale was preceded in death by his parents, his wife Evelyn, one grandson Brian Crane, brother Everett Crane and his wife Bernice, sister LaVerne Slechta and her husband Irvin, half-brother Major Albert McCall, and half-sister Lucean McCall. Those left to cherish his memory include his children Larry Crane and his wife Marla of Maricopa, Arizona; Ron Crane and his wife Joanne of Roseville, California; Dan Crane and his wife Wendy of Vail, Iowa; Lynn Ross of Vail, Iowa; and Mark Crane and his wife Dee of Woodward, Iowa; many grandchildren, step-grandchildren, great grandchildren, and step-great grandchildren; other family, and friends.

The family of Dale Crane created this Life Tributes page to make it easy to share your memories.

In lieu of flowers, memorial contributions can be made to the...

Send flowers to the Crane family.