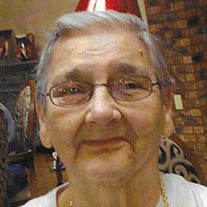 Connie Jean Witt, the tenth of eleven children, was born to Glen Witt and Blanche Marie (Kruse) Witt Husted on April 18, 1939 in Oskaloosa Iowa. She attended Fremont Early Elementary until the family moved to Illinois. Connie married Lloyd Hagerman in 1953, they divorced in 1957. Following the divorce Connie lived with Zeno (Jiggs) Neubauer for thirty three years until his death in 1989. They welcomed three children: Patsy Lee, Bart, and Brenda. During this time Connie worked at the Club 191 in Portsmouth, Iowa as a cook. After Zeno's death Connie took a job with Physician’s Mutual Insurance Company in Omaha, Nebraska, where she worked until she retired in 2001. During this time she met and lived with Bob Powers until he passed away in 2002. Connie then moved to Harlan, Iowa, where she lived until 2010 when she moved to Council Bluffs, Iowa to live with Bart. In 2018, she moved to Risen Son Christian Village until her death on Friday, February 11, 2022. Connie enjoyed spending time with family, cooking and baking, collecting M&M's memorabilia, reading books, and doing puzzles. She is by her children Bart (Barb) Neubauer of Council Bluffs, Iowa; Brenda (Galen Ayers) Neubauer of Harlan, Iowa; 7 grandchildren; 14 great grandchildren; sister Lillian (Henry) Ray of Tracy, IA; nieces and nephews; other family members and friends.

The family of Connie Jean Witt created this Life Tributes page to make it easy to share your memories.

Connie Jean Witt, the tenth of eleven children, was born to Glen...

Send flowers to the Witt family.