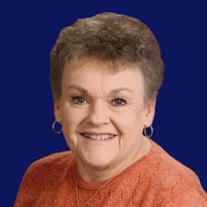 Connie Elaine (Nielsen) Jorgensen was born on October 8, 1949 in Council Bluffs, Iowa to Ronald and Elaine (Krohn) Nielsen. She was baptized at the First Lutheran Church in Avoca. She grew up and attended school in Avoca and graduated from AvoHa High School with the class of 1967. During the year of 1965, when she was a junior in High School, Connie met Bob Jorgensen at the Dairy Queen, where she worked, while he was on leave from the Navy. They united into marriage on July 6, 1968 at the Trinity Lutheran Church in Avoca. To this union three children were born: Steven, Jill and Michael. She attended Barnes Beauty School in Council Bluffs, Iowa, after graduation she worked at Louene’s Beauty Shop in Avoca. After the birth of her children she became a stay at home mom to raise her children. Along with helping Bob on the farm, she was an avid reader and sewed many of her children’s clothes. After her kids grew older Connie started watching the neighbor kids who they grew quite close to. She was a cashier at Jacobsen Oil in Hancock. She cherished her time with her Dominoes group and always enjoyed playing card games with family and friends. Connie dearly loved her grandkids and having them for sleep overs. On Tuesday, September 14, 2021, Connie passed away at the Avoca Specialty Center having attained the age of seventy-one years, eleven months and six days. She was preceded in death by her parents Ronald and Elaine; and one brother Ronald, Jr. Left to cherish her memories are her husband Bob Jorgensen of Avoca, Iowa; children Steven (Nikki) Jorgensen of Avoca, Iowa; Jill (Todd) Feigenbutz of Oakland, Iowa; Michael (Wendy) Jorgensen of Avoca, Iowa; eight grandchildren: Christian (Alyx), Erik (Madison), Kevin, Emma, Kyle, Cassidy, Nathan and Kaden; brother John (Nancy) Nielsen of Dunlap, Iowa; sister Sheri Nielsen of Omaha, Nebraska; nieces and nephews, other family and many friends.

Connie Elaine (Nielsen) Jorgensen was born on October 8, 1949 in Council Bluffs, Iowa to Ronald and Elaine (Krohn) Nielsen. She was baptized at the First Lutheran Church in Avoca. She grew up and attended school in Avoca and graduated from... View Obituary & Service Information

The family of Connie Elaine Jorgensen created this Life Tributes page to make it easy to share your memories.

Send flowers to the Jorgensen family.