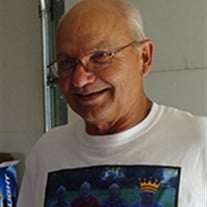 Clinton Dale Kienast, son of Arthur and Gwendolyn (Gaskill) Kienast was born on July 24, 1941 in Audubon, Iowa. He attended country school near Gray and Manning. He graduated from Irwin High School. On September 7, 1963, Clint was united in marriage to Kathryn Rasmussen in Harlan, Iowa. To this union two children were born: Julie and Michael. Clint worked at Agriland FS for 13 years, he also was self employed running Kienast Plumbing and Heating for 10 years. He also worked at Jacobs Corp for over 20years. He retired in 2006, Clint liked to stay busy and found himself the perfect retirement job at Shelby County Golf Course. Clint enjoyed being outdoors golfing and camping. He also enjoyed trips traveling south to Texas to visit his Texas Family. Clinton was the kind of person that anyone could go to for help and he would help them out anyway he could. He loved his family, especially spending time with his grandkids. Clint died on Friday, March 25, 2022 at Methodist Hospital in Omaha, Nebraska, attaining the age of eighty years, eight months, and one day. He was preceded in death by his parents Arthur and Gwendolyn Kienast, and sister Phyllis Borkowski. He is survived by his wife Kathryn Kienast of Kirkman, Iowa; children Julie (Ken) Harryman of Avoca, Iowa; Michael (Connie) Kienast of Harlan, Iowa; 6 grandchildren; 7 great grandchildren; siblings Allen Kienast of Poplar Bluff, Missouri; Stanley (Deb) Kienast of Lawson, Missouri; Jeff (Carolyn) Kienast of Jamaica, Iowa; Pam (Dan) Decker of Buckner, Missouri; brother-in-law Kermit Borkowski of Dexter, Iowa; nieces and nephews; other family members and friends.

Clinton Dale Kienast, son of Arthur and Gwendolyn (Gaskill) Kienast was born on July 24, 1941 in Audubon, Iowa. He attended country school near Gray and Manning. He graduated from Irwin High School. On September 7, 1963, Clint was united... View Obituary & Service Information

The family of Clinton D. Kienast created this Life Tributes page to make it easy to share your memories.

Send flowers to the Kienast family.