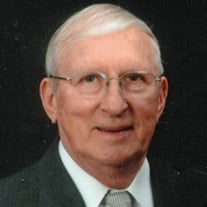 Cletus Herbert Schmitz, son of Marcella Pauley and Nicholas Schmitz, was born on a farm near Panama, Iowa, the second eldest in a family of eleven. The family moved to a farm near Harlan where Cletus attended and graduated from St. Boniface Catholic High School with the class of 1959. Cletus played basketball in highschool and baseball with the Westphalia Red Sox for many years. He worked with his father on the farm until he was drafted into the United States Army in January of 1961. He was stationed in Fort Carson, Colorado with the 5th Infantry Division. He was a proud veteran. Memorial and Veterans Day were so special to him as well as his comrades with the Helmer Reyelt Post 150 in Harlan, Iowa. Cletus was always honored to serve with the honor guard at military funerals. In 1964, Cletus met his soulmate Janice at a dance in Defiance, Iowa. They were married on May 29th, 1965, at St. Peter’s Catholic Church in Defiance, Iowa. They were privileged to have observed their 54th wedding anniversary this year. They began their family in Harlan where Cletus began employment with Western Iowa Pork until its closing and then Farmland Foods in Dension, Iowa. Cletus worked for the packing industry a total of 42 years when he took early retirement. It was short lived as Concerned Inc. offered him a 20 hour week maintenance job which soon turned into full-time. He worked there for a total of six years. The clients gravitated toward him and he loved and respected all of them. Cletus never fully retired. He then worked for Pauley Jones Funeral Homes, a job he loved. He wore a hat of many colors, always available and willing when someone needed a helping hand. He was a man of strong faith. We will always remember his love for his wife, Janice, children and his precious grandchildren. He taught them faith, love and respect for everyone. He loved attending his children and grandchildren’s events and especially Grandparents Day. They saw his competitive spirit in card games, football, basketball and everything else they talked him into. We will always remember his beautiful yard, the trees he planted and beautiful flower gardens. He loved Christmas and always had to get the tree and lights up early before it got cold. The memories of Christmas were so many, but we will never forget how he had to have his homemade ice cream at the end of the day and make sure everyone had a place to sleep for the night. Cletus passed away at Nebraska Medical Center in Omaha, Nebraska, on November 11th with his loving family at his side. Cletus is survived by his wife Janice of Harlan, Iowa; his children David Schmitz of Nevada, Iowa; Shari Proehl and her husband Chad of Urbandale, Iowa; Danny Schmitz of Parker, Colorado; Shelli Hansen and her husband Todd of Omaha, Nebraska; 9 grandchildren: Josh, Justin and Max Schmitz, Jesse and Jordan Proehl, Shauna Jo Schmitz, Maddie, Macey and Mallory Hansen and 1 step grandson Carter Trewet; siblings; Larry Schmitz and his wife Vicki of Westphalia, Iowa; Norman and his wife Gloria of Harlan, Iowa; Roger Schmitz and his wife Judy of Westphalia, Iowa; Marvin and his wife Joan of Harlan, Iowa; Linda and her husband Jim Bender of Lambertville, Michigan; Velma and her husband Bruce Arkfeld of Defiance, Iowa; Jim and his wife Vicki of Omaha, Nebraska; Doris and her husband Lenny Schmitz of Harlan, Iowa; Nancy and her husband Tom DeRuby of Bellevue, Nebraska. He was preceded in death by his father and mother Nick and Sally Schmitz; one brother Russell Schmitz; one niece Theresa Bender and his daughter-in-law Brenda Schmitz.

Cletus Herbert Schmitz, son of Marcella Pauley and Nicholas Schmitz, was born on a farm near Panama, Iowa, the second eldest in a family of eleven. The family moved to a farm near Harlan where Cletus attended and graduated from St. Boniface... View Obituary & Service Information

The family of Cletus H. Schmitz created this Life Tributes page to make it easy to share your memories.