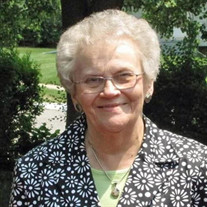 Clarice Ladell (she hated that middle name) Axland was born on a farm South and East of Irwin on June 6, 1931. First born to Theodore, a pipe smoking salty kind of guy and Thelma who was the best scratch cook on a wood fired stove in the area. Thelma had a sister named Gertie who impacted the three children greatly. As a result, all three children graduated from Irwin High School and all received college degrees fulfilling Gertie's strong hand. Clarice was baptized, confirmed, and married at St Paul's Lutheran Church in Irwin, Iowa. Clarice attended The Iowa State Teachers College (now the University of Northern Iowa) after graduating from high school. She taught in Kirkman and went back to school in the summers. Early on, she met Don Andersen at Rural youth activities. They fell in love and were married on December 23, 1953. Don had to leave to fight in the Korean War soon after they were married. Clarice continued to teach in the area. After the war, Don and Clarice settled into farming in Monroe Township, Shelby County, Iowa. Here they raised two children, Marsha and Richard. They retired from farming in 1967 and moved to Harlan, Iowa where Clarice began teaching in the Harlan Community Schools and Don worked in sales. They lived in the yellow house on the corner of 16th Street in Harlan. Clarice completed her education degree at Dana College graduating in 1972. Clarice retired from the Harlan Community School system in 1990. During Clarice's career in education, she received numerous awards and accolades; culminating in being named mother of the year in 1997. In Clarice's book called "Memories" which she gave her children in 1991, Clarice said, "My teaching career officially ended in May,1990. I enjoyed my 31 years as a teacher. I like to think I had a positive influence on the 1,000+ children I taught. I have some very good memories of this career. It was always nice to hear those magic words, 'You were my favorite teacher!' The next quotes were taken from Clarice's Mother of the Year speech in 1997. "I always enjoyed being called, "mom" or in later years "grandma" by students. To be mistaken by these two names made me feel I was regarded as a very important person. I challenge all of you who have children in school to write some special notes to those who help your children along the way!" Clarice and Don were both active in 4-H and many other organizations. Long time members of Immanuel Lutheran Church, they served for 10 years in the ELCA Mission Builder program traveling from Kansas to Minnesota building ELCA Lutheran buildings. Clarice was also a long-time board member of Salem Lutheran Home in Elk Horn, Iowa where she resided the last four years of her life. Carrying on the Norwegian heritage, mom was a baker of Norwegian lefse, (the flour kind), kringla, flotbrød, spritz cookies, and her tradition of baking rolls and sweet rolls has been handed down to the next generation. Clarice was known for her famous Gaige bars which were served at family gatherings. Clarice died on July 12, 2020 at Salem Lutheran Home in Elk Horn, Iowa attaining the age of eighty nine years, one month, and seven days. In addition to her parents, Ted and Thelma, her Aunt Gertie, her brother Ted Axland, sister-in-law Gloria Mills, brother-in-law David Buehlmann and niece Carolyn Finegan. She was preceded in death by her husband Donald D. Andersen in 2018. She is survived by her children, Marsha and her husband Kent Larson of Las Vegas, Nevada and Richard Andersen and his wife Laura of Jackson, Wisconsin. Clarice is also survived by her sister, Linda Buehlmann of Austin, Texas and a sister-in-law, Nancy Axland of Rio Verde, Arizona. She is also survived by brother-in-law: Lowell Andersen and Ed Mills and family. Clarice is also survived by two grandchildren: Steven Larson and his wife Carrie of Las Vegas, Nevada and Allison LaRue and her husband Terry of Germantown, Tennessee. She was blessed to have a step grandson, Mark O'Connor. She also was blessed to have four great grandchildren: Ian and Riley of Las Vegas and Corinne and Meryl of Germantown. Clarice was blessed to have step great grandchildren: Hannah and Matt LaRue. She is survived by nieces: Susan Erickson and family, Ann Erickson and family, Julie Snyder and family and nephew David Axland. She is survived by nieces: Denise Broveak and family, Sherry Lytle and family, and nephews Wade Mills and family and Kevin Mills and family. Lastly, she is survived by so many long-time friends from the potluck group, Mission Builders, Monroe Merrymakers, many faculty of the Harlan Schools, friends and staff at Salem Lutheran Home, Myrtue Medical Center Hospice, loving neighbors and members of Immanuel Lutheran. Clarice was an avid reader and a frequent leader of various bible studies for church. She remained a witness to Jesus Christ and the power of love and acceptance in the world. A private committal will be held. A funeral and celebration of life will be held at a future date.

Clarice Ladell (she hated that middle name) Axland was born on a farm South and East of Irwin on June 6, 1931. First born to Theodore, a pipe smoking salty kind of guy and Thelma who was the best scratch cook on a wood fired stove in the area.... View Obituary & Service Information

The family of Clarice Andersen created this Life Tributes page to make it easy to share your memories.

Clarice Ladell (she hated that middle name) Axland was born on...