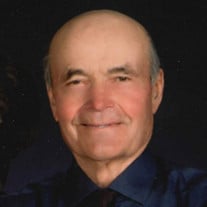 Clarence Arthur Reinig was born April 24, 1934 to John and Margaret (Schwery) Reinig at the family farm near Panama, Iowa. He attended nearby country schoolhouses in Washington Township. He was baptized, received first communion, and was confirmed at St. Mary of the Assumption Catholic Church, in Panama, Iowa, where he remained an active parishioner until his death. Clarence found fulfillment in his faith, family, farming, and his community and country. Clarence served in the U.S. Navy as an aircraft mechanic. From 1956-1957, he was stationed at Cecil Field in Jacksonville, Florida and completed tours aboard the USS Saratoga and USS Ticonderoga in the Mediterranean Sea. In 1957, he moved with his parents and two sisters to their new home and farm on Highway 44 near Portsmouth, Iowa. From there, Clarence continued to expand his farming operation and make his home. Clarence dedicated his life to nurturing the land and livestock. Over a lifetime of farming, he went from picking corn by hand to combining eight rows at a time. Together with his right-hand man of 33 years, Darrel Leinen, Clarence planted and harvested crops, plowed fields and fixed terraces and waterways, repaired and reconfigured machinery, and created innovative unloading and drying grain systems. Such ingenuity and aptitude combined with a diligent work ethic was the foundation of Reinig Farms. Clarence took pride in displaying antique machinery in the yard and making improvements to his buildings, including painting the doors red and erecting a windmill. Such creative engineering started in childhood when Clarence and his brother Ed would make their own farm toys. On April 9, 1983, Clarence married Jann Deitchler at St. John's Lutheran Church in Mineola, Iowa. Clarence and Jann welcomed one daughter, Lydia. Together they created a loving family and made many memories. He enjoyed visiting with and celebrating birthdays and holidays with extended family. Spending time with nieces and nephews was important to him. Friends and neighbors enjoyed his hearty laugh. Clarence traveled extensively with family and friends, visiting over 30 countries, including agricultural tours to South America and Australia, tours in Asia, Europe, and the Holy Land, as well as numerous driving vacations throughout the US, Ireland, and to Alaska. Clarence was an avid snow skier in Colorado and enjoyed dancing, particularly polka and ballroom. Clarence was honored to serve his church on the St Mary's Parish Council, Finance Council, and Building Committee, which guided the construction of the new parish hall. He represented the parish on the Shelby County Catholic Schools Endowment for eight years. He was also a member of the Shelby County Farm Bureau Board and Legislative Committee. In 2013, he was recognized with the Distinguished Service to Agriculture Award by the Shelby County Farm Bureau. More recently, Clarence had dedicated his time to the restoration of the Panama One-Room Schoolhouse Museum. He attended this schoolhouse as a child. Community support was important to Clarence along with donations to charities and those in need globally. His Catholic faith was strong and sustaining. Paired with stoic humility and a reverent smile, Clarence faced several discouraging health diagnoses with courage and determination. He was never one to miss Mass-even when abroad or on duty. Sunday morning coffee after Mass was always a highlight of the week. Clarence is survived by his wife Jann of Portsmouth, Iowa; his daughter Dr. Lydia Reinig of Durham, New Hampshire; siblings Gerald (Loanne) Reinig of Portsmouth, Iowa; Helen Mouser of Wichita, Kansas; Dr. Alice Reinig (Norm Schoenfeld) of Del Mar, California; Ed (Betty) Reinig of Harlan, Iowa; Margie Taylor of Arvada, Colorado; sister-in-law Sylvia Kepford of Fullerton, California; many nieces and nephews, neighbors, and friends. Clarence is proceeded in death by his parents, John and Margret Reinig; siblings Jerome Reinig, Leonard and wife Rose Mary Reinig, and Irene Reinig; brother-in-law Kenny Mouser; and godson Greg Taylor. In Lieu of flowers family suggests memorial be made to: Shelby County Catholic Schools or Panama One Room School Museum. Masks, Social Distancing & 15 person limit at a time are required during visitation hours

Clarence Arthur Reinig was born April 24, 1934 to John and Margaret (Schwery) Reinig at the family farm near Panama, Iowa. He attended nearby country schoolhouses in Washington Township. He was baptized, received first communion, and was confirmed... View Obituary & Service Information

The family of Clarence A. Reinig created this Life Tributes page to make it easy to share your memories.

Clarence Arthur Reinig was born April 24, 1934 to John and Margaret...