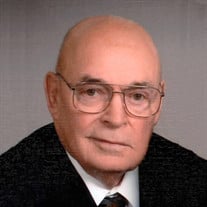 Charles (Charlie) LeRoy Allen was born on July 16, 1934, near Malvern, IA to Alta Alvira (Thiessen) and William Dale Allen. When he was nine months of age, his family moved to a farm east of Avoca. He was baptized and confirmed at English Lutheran Church in Avoca. He attended Knox #5 Country School through 7th grade and 8th through 12th grades at Avoca School and graduated with the Avoca Class of 1952. He participated and excelled in school sports and later in town team leagues. He was offered a full-ride scholarship to play football for the Iowa Hawkeyes, but instead chose to join the work force. Charles and Laura Ann Andersen were married on August 8, 1954 at First Lutheran Church, Avoca, IA. He worked at Van Nostrand Grain Co. from 1952 through 1959 and then moved to a farm south of his childhood home where he farmed for 44 years from 1959 to 2003. They then retired and moved to town. While farming, he also worked at the Heritage Restaurant, Avoca Auction Company and the Avoca Liquor Store. Charlie was a prime example of the phrase "you can take the boy out of the country, but you can't take the country out of the boy" as he quite frequently found many reasons to drive out to check out the homestead. Charlie enjoyed harvesting black walnuts and continued to do so up until the last year. He was an avid sports fan and was often seen and heard "officiating" from the bleachers and sidelines at his children and grandchildren's sporting events. After his retirement, he became the "self-appointed unofficial" building inspector at many building sites in and around Avoca. Jigsaw puzzles and word search books filled his retirement days as well. On April 20, 2020 he passed away peacefully at his home surrounded by loved ones. He had attained the age of eighty-five years, nine months and four days. Charlie was preceded in death by his parents, in-laws Ernest and Lillian Andersen, sisters LaDale Allen in infancy and Dorothy Eggerss, brother Dale Allen, sister-in-law Darlene Andersen, sister-in-law and brother-in-law Eleanor and Mike Quinn and niece Patti Kay Eggerss. He is survived by his wife of 65 years, Laura Ann, children Janet (Dick) Dorsey of Anita, IA; Wayne (Kelly) Allen of Avoca, IA; Barb (Gail) Goodner of Carroll, IA; and Larry (Traci) Allen of Odebolt, IA; 10 grandchildren and 7 great-grandchildren: Kristin (Devin) Christensen, Brooklyn and Breelyn of Ankeny, IA; Clayton (Meghan) Dorsey, Ashten and Reid of Anita, IA; Lindsey Kohorst, Baylie, Brynna and Brycee of Carroll, IA; Travis (Ali) Dorsey of Anita, IA; Madison Allen of Odebolt, IA; Alisha Allen of Denver, CO; Creighton (fiancé Kensey) Allen of Larchwood, IA; Carmen (Geoff) Martens of Avoca, IA; Payton (Garrett) Anderson of Lakewood, WA; and Eric Allen of Avoca, IA; sister Pat (Bob) Rodenburg of Omaha, NE; sister-in-law Bonnie Allen of Atlantic, IA; brother-in-law Marlin Andersen of Avoca, IA; brother-in-law Robert (Linda) Andersen of Avoca, IA; nieces, nephews, other relatives and many friends.

Charles (Charlie) LeRoy Allen was born on July 16, 1934, near Malvern, IA to Alta Alvira (Thiessen) and William Dale Allen. When he was nine months of age, his family moved to a farm east of Avoca. He was baptized and confirmed at English... View Obituary & Service Information

The family of Charlie LeRoy Allen created this Life Tributes page to make it easy to share your memories.

Send flowers to the Allen family.