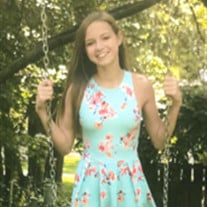 Charley Sophia graced our world with perseverance and passion on December 21, 2004. Her big blue eyes had the brightest sparkle and her smile was contagious. Right along with that smile came some ferociously strong lungs. If you have not... View Obituary & Service Information

The family of Charley Sophia Falkena created this Life Tributes page to make it easy to share your memories.

Charley Sophia graced our world with perseverance and passion...

Send flowers to the Falkena family.