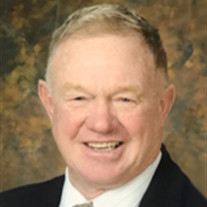 Charles Laverne Obrecht was born on February 4, 1939 to Donald L. Obrecht and Helen (Jensen) Obrecht on a farm west of Corley, Iowa. Later, he moved with his family to a farm southwest of Harlan where he grew up. He attended Center #7 (Windy Knoll) Country School through the 8th grade, and then went to Harlan High School where he graduated in 1957. He was united in marriage to Judy Kinsinger of June 5, 1966 at the Methodist Church in Grundy Center, Iowa. They lived on a farm near Walnut for six years. They then purchased a farm near Jacksonville and moved there in 1972 where he spent the remainder of his life. To this union, three sons were born: Donald Dean, Charles William and Gregory Laverne. Charlie’s passion has always been his Shorthorn cattle. He showed them at shows across the country, including Chicago International; San Antonio, Texas Livestock Exposition; Fort Worth, Texas; Louisville, Kentucky; Kansas City American Royal; Denver; Nebraska State Fair, Ak-sar-ben; and for over 67 years at the Iowa State Fair. His fondest memory was showing his Shorthorn steer, Willie, at the International Livestock Show in Chicago, in Denver, at San Antonio, Texas where he was the Reserve Grand Champion Steer, and in Fort Worth and Austin, Texas. Charlie’s interest centered around the cattle as a member of the Shelby County Cattlemen, and serving as county president and also as a District officer. He has been a member of the Iowa Shorthorn Association where he served as State President for two years, and also as a member of the American Shorthorn Association. When his children were old enough to join 4-H, he helped restart the Jackson Jets 4-H Club as a 4-H Leader. He strongly supported his children and grandchildren in their activities including sports, showing livestock, and farming. Charlie could talk to anyone, never knew a stranger, and always had a story or a joke to tell. Charlie died on November 25, 2020 at the age of 81. He is survived by his wife, Judy of 54 years; sons Donald (Jennifer) and Chuck (Renietta) both of Harlan; seven grandchildren: Allyssa, Wyatt, Addison, Reanna, Ryleigh, Cheyenne and Coy; siblings, Donna Scheel, Karla Lemon, Lyle (Carol) Obrecht, Larry (Sally) Obrecht, all of Harlan and many nieces and nephews. He was preceded in death by his parents, Donald and Helen Obrecht and his son, Gregory in 1986. The Tradition: Some folks just don’t get it. They think owning cattle makes no sense. It takes too much time, too much equipment, not to mention the expense. But the fondest memories of my life - they might think sounds funny - were made possible by Mom and Dad, ‘cause they spent the time and spent the money. You see, the most important lessons helping values grow so strong, come from loving cattle and passing that tradition on. Masks and Social Distancing will be required during visitation times

Charles Laverne Obrecht was born on February 4, 1939 to Donald L. Obrecht and Helen (Jensen) Obrecht on a farm west of Corley, Iowa. Later, he moved with his family to a farm southwest of Harlan where he grew up. He attended Center #7 (Windy... View Obituary & Service Information

The family of Charles L. Obrecht created this Life Tributes page to make it easy to share your memories.

Charles Laverne Obrecht was born on February 4, 1939 to Donald...

Send flowers to the Obrecht family.