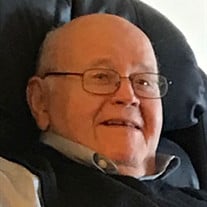 Captain Billy G. Cunningham, 80 of Eagan, MN passed away peacefully on the morning of December 29th, 2019. He was born in Fayetteville, TN on August 16, 1939 to William Harry Cunningham and Margart Naomi Thomas. He married Maxine Margaret McLaughlin on December 29, 1966. They were married for 34 years, and together had two children, Michael and Michele. He is preceded in death by his wife Maxine Cunningham; parents William and Margaret Cunningham; brothers-in-law Robert Wright, Edward Sain, Donald (Mick) Anderson, Frances (Sonny) McLaughlin and Bob McLaughlin; sisters-in-law Virginia Anderson, Sharon Sorrells, Kris McLaughlin and Cathy McLaughlin. He is survived by his children Michael (Lynae) Cunningham and Michele (Pete) Shaughnessy; siblings Nancy Wright, Sally Sain, Harry (Edwena) Cunningham, Mary Bass; and grandchildren Erin (Connor) Braaten, Tayler Cunningham, and Emily, Maxwell and Molly Shaughnessy. Billy graduated from Technical High School in Detroit, MI in 1958. Following high school, he enlisted in the United States Coast Guard and proudly served for 30 years. After achieving the rank of Chief Petty Officer, he graduated from Officer's Candidate School and attended Naval Flight Training. During his career, he was a Flight Instructor at the Coast Guard Aviation Training Center and was the Officer-in-Charge at the National Search and Rescue School. After his first Command at Coast Guard Air Station Houston, he was selected to attend the National War College (National Defense University). Upon his graduation in 1985, he was the Commanding Officer at Coast Guard Air Station Kodiak, Alaska and retired in 1988. He was one of the last dual-qualified pilots flying both rotary and fixed wing aircraft (His favorite being the HU-16e). Billy then worked for Northwest Airlines as Director of Training, retiring in 1998. Billy was a proud member of the Knights of Columbus. He attended Mary, Mother Catholic Church in Burnsville. Billy enjoyed playing golf, reading, watching the news and weather, trying new recipes and spending time with family and friends. He also was an active member of veterans organizations and a proud member of the Ancient Order of the Pterodactyl (Coast Guard Aviation Association). In Minnesota, there will be a visitation and prayer service on January 1; visitation is at 10:30 a.m. followed by a prayer service at 11:45 a.m. Klecatsky and Sons Funeral Home, 1580 Century Point, Eagan, MN 55121. Funeral Mass will take place on January 3 at St. Patrick's Catholic Church in Walnut, IA. Visitation is at 9:30 a.m. followed by Mass at 10:30 a.m. Burial at St. Patrick's Cemetery follows the Mass.

The family of Capt. Billy G. Cunningham created this Life Tributes page to make it easy to share your memories.

Send flowers to the Cunningham family.