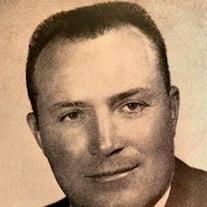 Burl Edwin Scott was born August 24, 1928, in Macedonia, Iowa, to Richard and Bernice (Rounds) Scott. He entered heaven's gate on May 6, 2022, at the age of 93. He graduated from Macedonia High School with the Class of 1946 and served a tour of duty with the US Army at Ft Leavenworth, Kansas, during the Korean War training troops. On April 16, 1952, he married Lois Gustafsen and to this union five children were born. Burl engaged in farming in Macedonia and Shelby before attending school to become an electrician and opening his business in Avoca. In 1964, he was elected to the Iowa House of Representatives serving Pottawattamie County. He was most proud of passing his bill to install the red octagon stop sign on school busses due to witnessing a young girl's death after exiting the bus when he was a child. This legislation was then adopted by every state and many countries, but Iowa was the first! He was also proud of cutting the ribbon on the opening of I8O and procuring the funding for Iowa Western Community College. Scott Electric provided agricultural and commercial electrical services as well as an appliance store and a laundromat for Avoca and the surrounding areas until after his retirement in 1993. Burl was very community and service orientated serving several terms as a Pottawattamie County Commissioner, commander of the American Legion in Macedonia, Shelby, and Avoca, member of the Pottawattamie Fair Board, and the Shiners. He was also a member of the Masonic Order. Burl and Lois snowbirded to Florida for many years before permanently moving to the Tampa area in 2016. He is survived by his wife of 70 years, his children: Debra (Richard) Hierlmeier of Jacksonville, FL, Randy Scott of Bettendorf, IA, Cindy (Jim) O' Donoghue, Ken (Renee) Scott, and Dan Scott all of Tampa, 12 grandchildren and 17 great grandchildren. Surviving brothers Mark (Margy) Scott of Dakota Dunes, SD, Larry (Vera) Scott of Warner Robbins, GA, and sister in law, Joan Scott of Council Bluffs, IA. He was preceded in death by his parents, and brothers, Richard and Max Scott.

Burl Edwin Scott was born August 24, 1928, in Macedonia, Iowa, to Richard and Bernice (Rounds) Scott. He entered heaven's gate on May 6, 2022, at the age of 93. He graduated from Macedonia High School with the Class of 1946 and served a... View Obituary & Service Information

The family of Burl Scott created this Life Tributes page to make it easy to share your memories.

Send flowers to the Scott family.