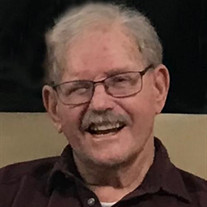 After 90 years on this earth, Bueal Franklin Hedstrom transitioned from his hospice bed at Odebolt Specialty Care into the arms of Jesus on July 26, 2020, with family by his side. Born on October 29, 1929, which was Black Tuesday and the beginning of the Great Depression, in Ida County, Iowa, he lived his entire life in the Kiron, Odebolt, Denison, Ida Grove and Schleswig areas. Bueal loved life, his family, people in general, and a good hard day’s work. In his last years, he loved to read the newspaper. His zest for life included high school basketball and rollerskating. He trusted in Jesus as His Savior at a young age. His love for Jesus was evidenced through his singing in the church choir, and singing gospel music with a men’s quartet, a mixed quintet, and a mixed trio; often traveling to other churches. His education began at age 4 in a one-room country schoolhouse with grades 1-8. The story is that he persisted until he was permitted to go to school with his older brother and sister. He graduated from Kiron High School in 1946 at age 16. He proudly served in the Iowa National Guard in his twenties and was a young farmer during that time. The severe drought of 1950-56 was devastating to farmers. One of his cherished times of life was traveling to Tuscon, AZ for 15 winters as a snowbird. However, his greatest joy was people, from his family to whomever he met along the way. His generosity, kindness, quick wit, big smile, and big laughs followed him throughout his life. Bueal faithfully attended and was a life-long member of First Baptist Church in Kiron. He was the son of the late Jubel and Florence (Johnson) Hedstrom and a brother to the late Gerald Hedstrom and Burdette Hedstrom. He is survived by sisters, Evangeline (Vannie) Webster, Maydelle Oslund and Evelyn Moller. His hard work ethic was learned early on while growing up on the farm and living through the depression; it carried him far. His love for people allowed him to work successfully as a salesman for Surge dairy equipment in his young married life. As his young family grew, the opportunity to buy a small farm north of Denison became a reality, and with that, Hedstrom Dairy Farm was born, and with that, a lifestyle that required a huge commitment of time and hard work from both himself and his family. Twelve years later, ahead of starting Hedstrom Concrete Products, he enjoyed selling for Bohlmann Livestock Waterers. Bueal was a loving husband to DeLoris (deceased) and a devoted father to his four children: Dawn Ulshafer (Carl), Alan Hedstrom (Landa), Paul Hedstrom, and Ruth Ann aka Tootie (deceased). He has thirteen fantastic grandchildren whom he adored: Shane Lindberg (Tiffany), Rory Lindberg (Lyndsay), Terri Beckley (Randy), Dustin Hedstrom (Lea), Thea Heiden (Adam), Noah Hedstrom (Jamie), Brock Hedstrom, Shelby Floris (Zee), Andria Siciliano (Eric), Skylar Hedstrom (Morgan), Austin Hedstrom, Tanner Hedstrom, and Lucas Hedstrom. Great-grandchildren were also adored: Hannah Lindberg, Trystan Lindberg (deceased), Treyten Kohler, Brysen Kohler, Jenessa Kohler, Marley Lindberg, Bailey Lindberg, Henry Hedstrom, Anna Hedstrom, Elli Heiden, Nash Heiden, Braiden Heiden, Scarlett Hedstrom, Beau Hedstrom, Nessa Hedstrom, Hadley Floris, Eric Siciliano, Jr., Julia Siciliano, Jake Siciliano, and Tripp Hedstrom. Gladys Hedstrom, Shirley Hedstrom (sisters-in-law) and William Webster, Harvey Oslund (brothers-in-law) predeceased him. He was loved by many and will be so missed. **A live-stream option of the service will be available at www.pauleyjones.com. **In lieu of flowers, memorials can be designated to the Kiron Baptist Building Fund. **Visitation will take place outside in front of the church. **Hand sanitizer and masks will be provided for the service inside.

After 90 years on this earth, Bueal Franklin Hedstrom transitioned from his hospice bed at Odebolt Specialty Care into the arms of Jesus on July 26, 2020, with family by his side. Born on October 29, 1929, which was Black Tuesday and the beginning... View Obituary & Service Information

The family of Bueal Franklin Hedstrom created this Life Tributes page to make it easy to share your memories.

After 90 years on this earth, Bueal Franklin Hedstrom transitioned...

Send flowers to the Hedstrom family.