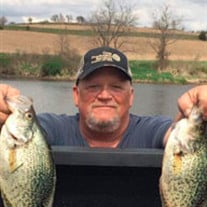 Bruce Allen Walter, the son of the late Robert Walter and Betty (Wester) Walter-Sievers, was born on July 22, 1963 near Sioux City, Iowa. As a child he traveled a lot, moving from the Storm Lake, Iowa area to Macon, Missouri, and Ft. Worth, Texas due to his father's job. Eventually Bruce and his family moved to Walnut where Bruce attended and graduated from Walnut High School. After graduation, Bruce started working in construction. Notably, he worked for Henningson Construction and then Western Engineering. During this time, he was dating his soul mate, Brenda Bladt. The two married on December 31, 1983 at the First Presbyterian Church in Walnut. Devoted to each other as they were, they started their own business called Walter Trucking. To this union, two children were born; Brian and Brandi, and they blessed Bruce and Brenda with 6 amazing grandchildren. For the past 13 years Bruce has worked for a company called Nutrien Ag Solutions as a machine operator and then safety foreman. He developed many friendships in and out of work, but kept his bonds strong with people he has always known. One of his favorite things to do was fish. He was definitely a boater and a fisherman. His favorite fish to fish for was walleye as bass fishing became too easy to do. Trips to Devil's Lake and Lake Ohae in South Dakota were real vacations as they were "away from corn and beans." Bruce was born to be outdoors. The first time he ever went hunting, Bruce talked his dad into shooting his gun from inside the car to hit a pheasant. He hit the pheasant and got a ticket from the cop as a reward. Family memories like this are what Bruce enjoyed making. He wasn't an outgoing man, but he loved to spend time with friends and most importantly his family. He loved his wife, his mom, his kids and he especially loved his grandkids. On September 4, 2019, Bruce passed away at his work in Brayton, attaining the age of 56 years, 1 month, and 13 days. He is joined in Heaven by his father, Robert Walter. Those left to cherish his memory are his wife, Brenda Walter of Walnut, Iowa; his children, Brian Walter and his wife Amanda of Boone, Iowa and Brandi Wittrock and her husband John of Anita, Iowa; 6 grandchildren, Bailey, Madison, Noah, and Natalie Wittrock all of Anita, Iowa and Oliver and Henry Walter of Boone, Iowa; his mother, Betty Walter-Sievers of Walnut, Iowa; and his hunting buddies, Mike and Kathy Gustafson, Derek Gustafson, Trista and Jeff Heinze, and Tony Behrens.

Bruce Allen Walter, the son of the late Robert Walter and Betty (Wester) Walter-Sievers, was born on July 22, 1963 near Sioux City, Iowa. As a child he traveled a lot, moving from the Storm Lake, Iowa area to Macon, Missouri, and Ft. Worth,... View Obituary & Service Information

The family of Bruce Allen Walter created this Life Tributes page to make it easy to share your memories.

Bruce Allen Walter, the son of the late Robert Walter and Betty...

Send flowers to the Walter family.