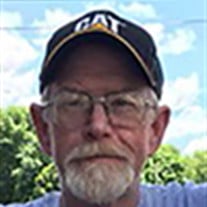 Bruce Alan Waddell, the son of Earl and Viola Waddell, was born on October 7, 1957 in Harlan, IA. He graduated from Harlan in 1976. After high school, he worked for Robinson Implement as a mechanic, Leonard’s Repair in Manila, and finally for the Shelby County Road Department, where he worked for the last 28 years as a mechanic. He also performed in the country music band, The Wilson Wranglers, as a singer and guitar player in his younger years. Bruce was united in marriage to Brenda Sampson on September 5, 1987 in Walnut, IA. This marriage was blessed with two daughters, Ashley and Farren. When the girls were growing up, he enjoyed taking them on his routes for work, mushroom hunting, firewood runs, teaching them how to be car mechanics, fishing, camping, playing catch in the yard, going to various school events, taking them sledding and on walks to get ice cream cones at the Texaco station. In Bruce’s later years, he enjoyed spending time with his family and friends. He was a simple man who would do anything for anyone. He could be found tinkering in his garage, making Saturday morning coffee runs, listening to his vinyl records or other music, and playing his guitar. Any opportunity he got, Bruce would pull his wife and daughters on the dance floor, even though he had two left feet. Bruce passed away on December 7, 2021, at Bergan Mercy in Omaha, NE having attained the age of 64 years and 2 months. He is preceded in death by his parents, Earl and Viola Waddell; father-in-law, John Sampson; sister and brother-in-law, Connie and Wayne Ray. Left to cherish his wonderful memories are his wife, Brenda; his daughters, Ashley (Randy) Mether of Harlan, IA; Farren (Nathan) Johnson of Malcom, IA. His sister, Carolyn (Dean) Finken of Atlantic, IA; two grandpuppies, Dottie and Paisley; many nieces and nephews, other relatives and friends.

Bruce Alan Waddell, the son of Earl and Viola Waddell, was born on October 7, 1957 in Harlan, IA. He graduated from Harlan in 1976. After high school, he worked for Robinson Implement as a mechanic, Leonard&#8217;s Repair in Manila, and finally... View Obituary & Service Information

The family of Bruce Alan Waddell created this Life Tributes page to make it easy to share your memories.

Bruce Alan Waddell, the son of Earl and Viola Waddell, was born...

Send flowers to the Waddell family.