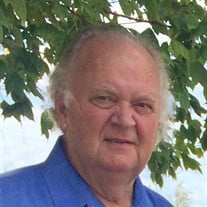 March 1, 1954 came in like a lamb when Bruce Gordon Holtz was born to Ivan and Nadine Holtz in Council Bluffs, Iowa. Born a premie, Bruce was small in structure, but strong in will. In the years that followed, Bruce would give many, many unselfish contributions to this world. In his younger years, Bruce was the typical kid - playing baseball, and riding bikes with the Paulsens, the McMurphys and the Schultzs. It wasn't until around junior high, that he became interested in the idea of entrepreneurship. He mowed yards, raked leaves, scooped sidewalks and faithfully cleaned the Avoca State Bank. He even had one employee - his sister, Diane. Still today, she argues the fact whether she ever was fully paid. One day when Bruce was twelve, family friend Harry Bledsoe, our dad Ike, and Bruce were all sitting on the front porch. Harry ended the conversation with, "Ike, let him join." And so it started. A whole new world opened for Bruce. He joined Avoca's Troop 97 in 1966. He rapidly rose through the ranks, and in 1971 he earned the Boy Scouts highest award, Eagle Scout. In 1972, Bruce graduated from AvoHa High School. He then attended Gateway Electronics in Omaha, NE which led to a lifelong career in electronic technology. Throughout the years, Bruce worked at Niver Electronics, the City of Avoca, Mertz TV, and Liberty Labs. He had a knack for fixing televisions. Even though 25+ years had passed since his gig at Mertz TV, it was no surprise when his phone would still ring with requests for TV repair. Ever hear of the "Cable Guy"? Yep! Bruce was the "TV Guy". Earning Eagle Scout was not the end of the scouting trail for Bruce. He remained with Avoca's Troop 97 as their scoutmaster for over 40 years, retiring in 2015. During this time, he assisted an incredible 60 Boy Scouts in attaining their Eagle Award. He taught them, he mentored them, and he took them on high adventure trips to places such as the Colorado Rookies, the World Scouting Jamboree in Alberta, Canada, and the boundary waters of Ely, Minnesota. Every Memorial Day he assisted them in hanging flags at the cemetery. He often mentioned that he wished he had a nickel for every flag he ever hung. Bruce's scouting volunteerism did not go unnoticed. He was honored with the MidAmerica Council Award of Merit in 1983, the Owahanasee District Award for Outstanding Promotion of Eagle Scouts in 1997, and the Silver Beaver Award in 2000. He was highly respected by both his scouts and his peers. Bruce loved spending time with his brother, Brett. True gear-heads at heart, they both spent many weekends polishing up the Trans Am, the Firebird, the GTO, and the Corvette. They would take them to local car shows and many times they would bring home trophies as a result of their efforts. Bruce loved his niece and nephews with his whole heart. Always a proud uncle, he showed them some of the finer things in life, such as going to the casino on Sunday, or buying lotto tickets at the gas station. Their parents weren't so thrilled. Bruce left us on June 21, 2021 at the Nebraska Medical Center at the age of 67 years, 3 months, and 20 days after a short battle with leukemia. His job on earth was done. Bruce- you may have come into this world like a lamb, but you certainly left like a lion. You have earned more love and respect than a normal man would earn in ten lifetimes. We'll miss you Bruce and you will always, always be remembered. Bruce was preceded in death by his parents, Ike and Nadine Holtz, and will be sorely missed by his puppy Barney, his sister Diane (Jerry) Stamp of Avoca, his brother Brett (Bonnie) Holtz of Atlantic, his nephews Jerod (Margaret) Stamp of Plattsmouth, NE, and Jordan Stamp ( Melissa Yeager) of Bellevue, NE, his niece Hana Holtz of Atlantic, his great-nieces, Joslyn and Maggie Stamp of Plattsmouth, his long-time friend Dr. Marcia Alff of Avoca, and a host of relatives and friends.

March 1, 1954 came in like a lamb when Bruce Gordon Holtz was born to Ivan and Nadine Holtz in Council Bluffs, Iowa. Born a premie, Bruce was small in structure, but strong in will. In the years that followed, Bruce would give many, many unselfish... View Obituary & Service Information

The family of Bruce G Holtz created this Life Tributes page to make it easy to share your memories.

Send flowers to the Holtz family.