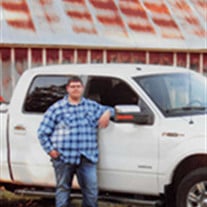 Brandon Stephen Nelson was born on April 16, 1999 to Lori Nelson and Steve Nelson. He died December 5, 2021 in Denison, IA at the age of twenty-two years, seven months and nineteen days. Brandon was born in Omaha, NE. He was raised on Grand Avenue in Harlan, Iowa. Brandon attended Harlan Community Schools and graduated with the class of 2017. He attended DMACC in Ankeny where he studied diesel mechanics. At a young age we knew Brandon wanted to be a mechanic. He was always helping his friends and family with diagnostics and simple repairs. He loved tearing things apart to see how they worked. As an adult, Brandon continued his mechanical career at Spee Dee in Ankeny. He eventually moved to Carroll to be closer to his friends and family while working at Scranton Manufacturing and Beckstrom Repair. When very young, Brandon loved dressing like his dad and shadowing his every move. You could find the two together engaged in mowing, snow removal and doing household repairs. It wasn't all work and no play for the duo, who would also spend time together fishing, golfing or working in the garden. In his younger years, Brandon could also be found with his twin sister, Brooke, at his side cruising the neighborhood in their Gator. When his big sister Brianna would have her friends over, Brandon would be the perfect minion tending their every need. Brandon was also quite young when we first saw how much love his little heart could hold. He was always the first in line when it came time to help his Grand Avenue Family. He would help with little things like wanting to be woken up early so he could scrape the ice/frost off the windows of cars, helping out with yard work, home remodels, or offering words of wisdom on just about any project. As he grew up, he would clean the sidewalks and driveways in a 2 block area after it snowed. This exasperated his mom who had to wait hours because her driveway was always the last on his list. Brandon was always a compassionate helper. Throughout the years, you would have found Brandon assisting Keith the school custodian at Westridge Elementary, cleaning basketball floors during games, assisting Ron Novotny with equipment and calling games for KNOD, and helping Coach Mitch with basketball camps. He also attended UMYF Youth Group in middle school, and during his high school years, he engaged in trap shooting, FFA, and shop/metals class where he created the FFA emblem that continues to hang on the wall at the high school. His sister Brianna sums up his high school career as good times, loud trucks, wrecking vehicles and cruising. As Brandon chased life on his own, he and his mom found a deepening of their relationship. Brandon would make time for regular check-ins and often seeking her advice in setting up home. They eventually found themselves spending time together, where he would grill or smoke meals, enjoy front porch conversations with adult beverages and take road trips to visit family. Brandon enjoyed introducing his mom to his favorite artists and songs. He eventually discovered that his bossy mother would become his friend and confidant, taking opportunities to share with her his goals, hopes, or meeting at Grandma Mary's. A few of Brandon's most treasured moments included seeing his big sister Brianna graduate with a doctorate in Occupational Therapy from Creighton and marry Nick, who would become a true brother, mentor and friend. He was also delighted to see his twin sister, Brooke, graduate with honors from Aveda Institute chasing her own dreams that would take her to Colorado. He truly loved spending time with his race family and their littles in garages working on race cars and having a few beers; the littles called him Uncle Chop. Brandon's pride and joy was his truck. He recently spent many hours rebuilding the motor. He was so proud of that truck, as it truly became a sacred space for him. He would go for long drives, chat with neighbors and friends and make sure to swing by and visit those closest to him even as he neared the end of his earthly journey. Even now, he is off-roading the streets of heaven in his Ford F-150. He is survived by his mother Lori Nelson of Harlan, IA; father Stephen Nelson (Lisa Prater) of Manilla, IA; sister Brianna (Nick) Starr of Fairborn, OH; twin sister Brooke Nelson of Ft. Collins, CO; maternal grandmother Mary Pollock of Denison, IA; paternal grandmother Diane Ware of Omaha, NE; aunts Lanette Plambeck of Altoona, IA; Amanda Ware (Brett Johnson) of Omaha, NE; Stacey Overman (Tim Pszanka) of Thornton, CO; cousins Meghan Plambeck (Jacob Senchak) of Washington DC; Brad Arnold of Fremont, NE; Elizabeth Pszanka (Jake Pryor) of Logan, IA; Emeliana Carroll of Omaha, NE; Zane Carroll of Omaha, NE; other family members and many friends.

Brandon Stephen Nelson was born on April 16, 1999 to Lori Nelson and Steve Nelson. He died December 5, 2021 in Denison, IA at the age of twenty-two years, seven months and nineteen days. Brandon was born in Omaha, NE. He was raised on Grand... View Obituary & Service Information

The family of Brandon Stephen Nelson created this Life Tributes page to make it easy to share your memories.

Send flowers to the Nelson family.