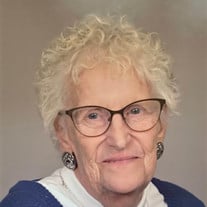 Bonnie Lou Mitchell was born on October 4, 1938, in Shelby County, Iowa, to Jake and Vernie (Langland) Vinding. She was baptized at the Altamont Baptist Church in Harlan and graduated from Harlan High School. On June 8, 1957, Bonnie was united in marriage to Paul Mitchell at the Altamont Baptist Church. To this union three children were born: Julie, Lori and Jon. Bonnie was a stay at home mother when her children were young and did various other jobs. She taught herself how to use the computer so she could be an administrative assistant. She worked at this position for West Central Development until she retired in 2002. She loved the outdoors and because of that she had a special bond with her father. Her and Paul enjoyed traveling, camping when their children were young, and even enjoyed several cruises. She loved flowers and bird watching. She adored her grandkids and great grandkids and loved being at all their activities. Most recently she took on a job driving students around for the AHSTW School District; a job she took much pride in. Bonnie passed away in the early morning hours on Sunday, April 17, 2022 at her home having attained the age of 83 years, 6 months and 13 days. She was preceded in death by her parents Jake and Vernie; siblings Eldon and Ardy; and daughter Julie. Left to cherish her memory are her husband Paul Mitchell of Avoca, Iowa; children Lori (Denny) Iwen of Avoca, Iowa; Jon (Angie) Mitchell of Walnut, Iowa; son-in-law Dean Ausdemore of Avoca, Iowa; 5 grandchildren: Nicole (Troy) Watts of Riceville, Iowa; Dustin Ausdemore of Walnut, Iowa; Brooke (James) Ploen of Walnut, Iowa; Emily (David) Brown of Pomeroy, Iowa; Erica Mitchell of Walnut, Iowa; 3 great-grandchildren: Jackson, Nolan and Ellie Ploen; 2 great-grandchildren on the way Baby Ploen and Baby Brown; extended family Lance Hawks of Sioux City, Nebraska; Angela Hawks-Johnson of Houston, TX; nieces and nephews, other family and many friends.

Bonnie Lou Mitchell was born on October 4, 1938, in Shelby County, Iowa, to Jake and Vernie (Langland) Vinding. She was baptized at the Altamont Baptist Church in Harlan and graduated from Harlan High School. On June 8, 1957, Bonnie was united... View Obituary & Service Information

The family of Bonnie Lou Mitchell created this Life Tributes page to make it easy to share your memories.

Send flowers to the Mitchell family.