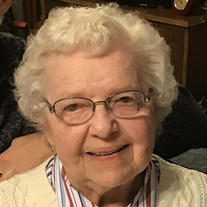 Betty Jane Drewelow, the daughter of Wellington and June (Blanchard) Drewelow, was born on December 22, 1921 in Wesley, Iowa. Shortly after her birth, her family moved to Omaha, Nebraska where she grew up. She enjoyed going to movies at the Orpheum Theatre and riding the city street cars to go places. Betty graduated from Omaha North High School with the class of 1939. Following high school she went to Iowa State University(ISU) majoring in Home Economics Education. While attending ISU, Betty met Harry "Doc" Lortz who was studying to become a Veterinarian. On August 8, 1942 Betty was united in marriage to Doc at Grant City, Missouri. They made their home in Earlham, Iowa, and they were blessed with the birth of two children: Sandi and John. In 1950 they moved to Coleridge, Nebraska where Doc worked as a Veterinarian out of their house. Betty worked for him answering the phones, doing clerical work, and helping with the animals. They retired in 1977. Following retirement Betty and Doc moved to Ames, Iowa where they enjoyed attending ISU sporting events. In 1993 they moved to Yankton, South Dakota where they resided until 2015 when they moved to Dunlap Specialty Care in Dunlap Iowa. Wherever Betty and Doc lived they were members of the Lutheran Church. Betty enjoyed being involved with church groups. Betty was once a 4-H leader and Cub Scout leader Betty loved caring for cats and dogs, working in her flower gardens, sewing and baking! There were always cookies and pies available when anyone stopped by. Her specialties were apple pie and apricot jam. Betty always had a smile on her face and a positive attitude toward life. On Sunday, October 18, 2020 Betty passed away peacefully at Dunlap Specialty Care in Dunlap, Iowa at the age of ninety-eight years, nine months, and twenty-six days. She was preceded in death by her parents, her husband Doc, and her brother Bob Drewelow. Those left to cherish her memory include her daughter Sandi Sharp and her husband Jim of Arion, Iowa; son John Lortz and his wife Susan Leavitt of Omaha, Nebraska; grandchildren Jeff Sharp of Columbus, Ohio; Wendi Tonder and her husband Eric of Fairmont, Minnesota; Jack Lortz of Omaha, Nebraska; great grandchildren Ellie and Abby Tonder; and Megan and Gabe Sharp; other relatives and friends.

Betty Jane Drewelow, the daughter of Wellington and June (Blanchard) Drewelow, was born on December 22, 1921 in Wesley, Iowa. Shortly after her birth, her family moved to Omaha, Nebraska where she grew up. She enjoyed going to movies at the... View Obituary & Service Information

The family of Betty Lortz created this Life Tributes page to make it easy to share your memories.

Betty Jane Drewelow, the daughter of Wellington and June (Blanchard)...

Send flowers to the Lortz family.