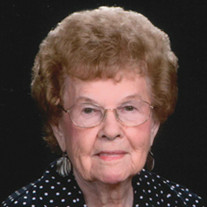 Betty Jean Boeck, daughter of Anna Margrete (Laugesen) and Nels Hansen Olsen, was born on February 7, 1926 at the family farm west of Harlan, Iowa. She was baptized at home at the age of four by the Immanuel Lutheran Church minister out of Harlan. Betty attended the Lincoln Township Number 4 country school, a one room school that had one teacher for grades 1 through 8. She went on to attend Tennant High School where she enjoyed music class and playing basketball and graduated with the class of 1943. While growing up, she enjoyed playing house with her siblings in the corn crib, swimming in the horse tanks, free movies in Tennant and going to Harlan on Friday nights even if it meant taking her clingy little sister Erma Lee. She also helped her grandmother bake cookies and pies for the threshing crews on the farm. While in school, Betty began dating one of those young men from the threshing crews and he became the love of her life. William Charles Boeck caught her eye while working on the family farm and they went on to marry June 4, 1944 at the Immanuel Lutheran Church in Harlan. To this union five children were born: Terry, Jim, Steve, Julie and Brian. After their marriage, William and Betty raised their children on farms in Cass, Lincoln and Shelby Townships in Shelby County. They were longtime members of the Immanuel Lutheran Church where Betty taught Sunday School and held various offices in the women’s church groups. While raising her children, Betty served as a 4-H leader for many years and as a room mother for her children while they attended grade school in Harlan. She also served on the Myrtue Memorial Hospital Board for six years and belonged to the Pioneer Country Club. She also enjoyed playing bridge and watching sports on the television. Betty’s life revolved around her family and farm. She was a dedicated wife and loving mother, grandmother, great grandmother and later even great-great grandmother. She loved cooking and baking and visiting with all of her old neighbors at church talking about great memories on the family farm. She’s well known in her family for her homemade Grandma Betty bars, M&M cookies and caramel rolls. William died on April 11, 1987 and Betty continued to live in Harlan for many years. She later made her home in Fremont, Nebraska at the Heritage at Shalimar Gardens assisted living facility where she enjoyed activities like the busy bakers club. She died on July 24, 2019 at the Dunklau Gardens attaining the age of ninety-three years, five months and seventeen days. In addition to her husband and parents, Betty was preceded in death by her son Terry and her siblings, Agneta Jensen, Ruby Christensen, Helmer Olsen, Mary Jane Olsen, Darlene Saltmarsh and Erma Lee Roenfeld. She is survived by her children: Jim Boeck and his wife Barbara of Monticello, Minnesota; Steven Boeck and his wife Jayne of Kansas City, Missouri; Julie Ann and her husband Bob Robinson of Fremont, Nebraska and Brian Boeck and his wife Carol of Denison, Iowa; daughter-in-law Dixie Boeck and her late husband Terry of Fremont; eleven grandchildren; twenty-six great grandchildren; four great-great grandchildren; brothers-in-law Bob Saltmarsh of Hartford, South Dakota and Dwain Boeck and his wife Freda of Harlingen, Texas; nieces and nephews; other relatives and many friends.

Betty Jean Boeck, daughter of Anna Margrete (Laugesen) and Nels Hansen Olsen, was born on February 7, 1926 at the family farm west of Harlan, Iowa. She was baptized at home at the age of four by the Immanuel Lutheran Church minister out of... View Obituary & Service Information

The family of Betty Jean Boeck created this Life Tributes page to make it easy to share your memories.

Send flowers to the Boeck family.