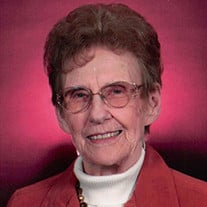 Betty Louise, daughter of Louis and Irene (Quathamer) Ahrenholtz, was born on January 16, 1924, on a farm near Manilla, Iowa. Baptized as an infant, she was confirmed April 17, 1938, in the Evangelical faith. Betty attended the Defiance Public School graduating in 1941. After attending Westmar College in LeMars with an elementary teaching certificate, she taught until her marriage to Alvin “Buck” Armentrout on March 2, 1946. One year later the couple moved to their farm south of Irwin, Iowa. Betty was a typical farmer’s wife, homemaker and devoted mother to their two daughters, Dianna and Lu Anne. When the girls started school, Betty resumed her teaching career in the same school system making it easy to attend their activities. With a positive attitude Betty greeted everyone with a smile, open arms and a hug. Company was always welcome at Betty’s home. Her family and home life were most important to Betty, she loved being surrounded by her children, grandchildren and great grandchildren. She and Buck enjoyed trips to Branson, family vacations to Minnesota, and after retirement, traveling to the east coast, west coast, southwest, Hawaii, and Mexico. Betty had many varied interests. She was the “Doll Clothes” lady of area craft fairs. She wrote many poems for relatives and friends observing special occasions. Genealogy answered her interests in ancestral histories. The kitchen was her favorite room, fixing many family and company dinners and lots of baking. She spent hours making the “cutout” cookies for the family’s traditional Christmas cookie decorating party. She felt most comfortable and confident when she could plan ahead and be organized for each task at the time. Betty liked flower gardens, sibling reunions, friends, family reunions, ceramics, crafts, and keeping a daily diary. She also enjoyed Round Robin letters from her college friends since 1943. After Buck’s death, Betty remained on the farm they shared for 68 years until 2019 when she made her home with daughter Dianna and Tom Gaer. She continued to look forward to all the family dinners, birthdays, and special holidays still celebrated in her home. In addition to the good food and visiting, the great grandchildren provided her with hours of entertainment, enjoyment and just the therapy she needed. Betty died on Tuesday, July 27, 2021 surrounded by her loving family at her home in Irwin, Iowa, attaining the age of ninety-seven years, six months, and eleven days. In addition to her parents, Louis and Irene Ahrenholtz, she was preceded in death by her husband Buck, three brothers Harry Ahrenholtz and his wife Annajean, Harold Ahrenholtz and his wife Frances, Howard Ahrenholtz and his wife Lois, sister Aletha and her husband Harold Brue, sister-in-law Marlene Ahrenholtz, and granddaughter Megan Youngkin. Loved ones to cherish her memory are two daughters Dianna and husband Tom Gaer, Lu Anne and husband Hal Youngkin, four grandchildren Greg Gaer and Tanya, Karissa and Dave Sears, Christopher Youngkin and Jenna, Keri and Richard Ranney, eleven great grandchildren, Grace and Grant Gaer, Elin, Avi and Ronin Sears, Chloe Postel, Jaeda and Caila Youngkin, Hallie, Jamiee, and Buck Ranney, two brothers Bill Ahrenholtz and wife Louise, Dick Ahrenholtz, nieces, nephews, other relatives and many friends.

Betty Louise, daughter of Louis and Irene (Quathamer) Ahrenholtz, was born on January 16, 1924, on a farm near Manilla, Iowa. Baptized as an infant, she was confirmed April 17, 1938, in the Evangelical faith. Betty attended the Defiance Public... View Obituary & Service Information

The family of Betty Louise Armentrout created this Life Tributes page to make it easy to share your memories.

Send flowers to the Armentrout family.