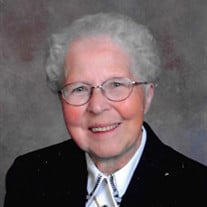 Bernice Schmitz, daughter of Bernard and Eleanor (Gubbels) Schmitz, was born on July 12, 1925 on a farm near Westphalia, Iowa. She was baptized and confirmed at St. Boniface Catholic Church in Westphalia. She entered St. Joseph&#8217;s Convent... View Obituary & Service Information

The family of Sr. Bernice Schmitz created this Life Tributes page to make it easy to share your memories.