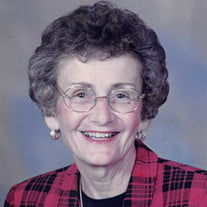 Barbara Jean Hansen, the daughter of Lehman Richard and Edith Kathryn (Rold) Christensen was born on August 3, 1936 in her grandfather's home in Harlan, Iowa. She was baptized and confirmed at Trinity Lutheran Church in Manilla, Iowa. She graduated from Harlan High School in 1954. After graduation, she worked for an insurance company for two and one half years in Omaha, Nebraska. On December 8, 1956 she was united in marriage to Leland James Hansen in Harlan, Iowa. They made their home on a farm at Manilla, Iowa until 1960. They then moved to Council Bluffs in September of 1960 where Barbara worked for another insurance company. In 1962 they moved to a farm west of Oakland, Iowa where they raised their family. Barbara was a member of St. Paul's Lutheran Church in Oakland where she served as church treasurer as well as Sunday School and Bible School teacher. In 1989 she joined St. Paul's Lutheran Church in Council Bluffs. For 25 years she cleaned houses for numerous people. She retired from cleaning to care for her husband, who died in 1999. Barbara died on Thursday, December 30, 2021 at The Heritage at Fox Run in Council Bluffs, Iowa, attaining the age of eighty-five years, four months, and twenty-seven days. She was preceded in death by her parents, husband, brothers Donald, Jack and James Christensen; sisters-in-law Fran and Carol Christensen and Lorna Crisp; brothers-in-law Norman Mathiasen and Ralph Crisp; father and mother-in-law Levi and Nettie Hansen. She is survived by her children, a daughter Wendy (Joe) Finnell of Atlantic, Iowa; her sons Timothy (Denell) Hansen of Neola, Iowa; and David (Shelly) Hansen of Council Bluffs, Iowa; six grandchildren Jennifer (David) Thompson of Norwalk, Iowa; Melissa (Nathan) Erickson of Grimes, Iowa; Dane (Victoria) Hansen of North Liberty, Iowa; Casey (Chad) Otte of Omaha, Nebraska; Andrew (Stephanie) Hansen of Council Bluffs, Iowa; Kelsey (Andrew) Dragon of Council Bluffs, Iowa; seven great grandchildren Lydia Thompson, Connor and Liam Erickson, Julian and Macklin Hansen, Jack and Finn Dragon; one sister Joanne Mathiasen of Harlan, Iowa; sister-in-law Carol Christensen of Loveland, Colorado; many nieces and nephews; other family members and friends.

Barbara Jean Hansen, the daughter of Lehman Richard and Edith Kathryn (Rold) Christensen was born on August 3, 1936 in her grandfather's home in Harlan, Iowa. She was baptized and confirmed at Trinity Lutheran Church in Manilla, Iowa. She... View Obituary & Service Information

The family of Barbara Hansen created this Life Tributes page to make it easy to share your memories.

Barbara Jean Hansen, the daughter of Lehman Richard and Edith...

Send flowers to the Hansen family.