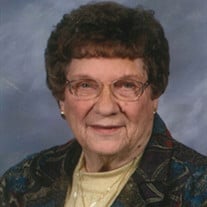 Arline Rosine was born to Peter Martin and Rosie Kristine (Christensen) Jensen on March 14, 1924 at grandparent’s home near Avoca, Iowa. She was baptized and confirmed by the English Lutheran Church in Avoca, Iowa. She was raised on farms by Hancock, Iowa until 1939 when they moved to Harlan, Iowa. She attended Valley #2 Country School and Hancock Community School. She graduated from Harlan High School with the class of 1941. She was employed by Harlan National Bank from 1941 until February 1951. She also worked at Farmer’s Saving Bank in Irwin, Iowa for 35 years, retiring in December 1989 having achieved Vice President and member of Board of Directors. In 1950 she married Cyrus Jr. Monson of Irwin at Immanuel Lutheran Church in Harlan. To this union, twin daughters, Lorna and Lana, and son Marty were born. In March 1957 Cyrus was killed in an automobile accident. In 1959 she married Ray Gans in Irwin. He passed away in 1986 after a lingering illness. She was active in church and community. She was a member of St. Paul’s Lutheran Church of Irwin, life member of VFW Auxiliary #941 in Harlan, AM Legion Auxiliary #614 of Irwin. She served as officers in National Bank Women Association, Myrtue Memorial Hospital Auxiliary Board, City Clerk of Irwin, Shelby County Board of Review. She was treasurer of Ladies Women group at St. Paul’s Lutheran Church for many years and held this office until her passing. She held several offices in Ladies’ groups and Sunday school at St. Paul’s Lutheran Church. She received the Community Leadership Award of Shelby County Chamber of Commerce for 2002. Arline enjoyed time spent at Lake Okoboji, playing cards, doing puzzles, computer games, and eating out. She was active in 1941 Class Reunions held over the years. She followed most of grandkids and great grandkids activities. Arline passed away on Tuesday, September 10, 2019 at Myrtue Medical Center in Harlan, attaining the age of ninety-five years, five months and twenty-seven days. She was preceded in death by her parents, two husbands, only sister Mildred Wunder, daughter Lorna, stepson Dr. Jan Gans, and step grandson Brandon Wahling. She is survived by her daughter Lana (Richard) Schwieso of Irwin, Iowa; son Marty Monson of Lincoln, Nebraska; son-in-law Dave Wahling of Shelby, Iowa; grandsons Matthew (Janae) Sternberg of Avoca, Iowa; Alex Monson of Lincoln, Nebraska; Ian (Amanda) Monson of Lincoln, Nebraska; Nathan Gans of Grand Rapids, Michigan; 4 great grandchildren; nieces and nephews; other relatives and many many friends.

Arline Rosine was born to Peter Martin and Rosie Kristine (Christensen) Jensen on March 14, 1924 at grandparent&#8217;s home near Avoca, Iowa. She was baptized and confirmed by the English Lutheran Church in Avoca, Iowa. She was raised on... View Obituary & Service Information

The family of Arline Rosine Gans created this Life Tributes page to make it easy to share your memories.

Send flowers to the Gans family.