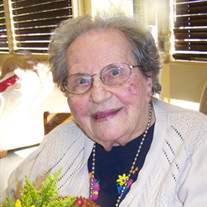 Aquinata Theresa (Kaufman) Gross, 100, was born October 29, 1919 to August and Mary (Schneider) Kaufman at her rural home near Westphalia, Iowa. The eighth of twelve children, she was named after her paternal aunt, Sister Aquinata OSF, of Campbellsport, Wisconsin, and was honored to claim St. Thomas Aquinas as her patron saint. Her name was soon shortened, and she answered to "Nottie" for the rest of her life. On June 25, 2020, Nottie died peacefully at Elm Crest Retirement in Harlan, Iowa. ************************************************************ Nottie was baptized and confirmed at St. Boniface Catholic Church in Westphalia. She attended country school in the winter and parochial school in the fall and spring, graduating from the eighth grade at St. Boniface School in Westphalia. Helping on the family farm was the daily routine as she was growing up. Nottie's favorite chores were in the kitchen: cooking and baking. During the winters she enjoyed sewing, embroidering, and making quilts. As a teenager she did some domestic work for families in Harlan and clerked at a retail store. On September 27, 1937, Nottie married Emil Gross at St. Boniface Church in Westphalia. They spent their honeymoon picking corn by hand on their small farm near Earling, known as "the Eighty." In 1944 they bought and moved to a larger farm near Westphalia, just a couple miles from where Nottie grew up. Emil and Nottie were happy with their new farm, restored the homestead and land, raised their family of 13 children here, and called this "home" for the rest of their married life. During the years Nottie was always busy: raising the children, cooking meals, baking bread, laundering clothes, tending chickens, gardening, canning produce, and cleaning the house, and she seemed to enjoy all these tasks. Her children recall that often she sang while she worked. Favorite songs were "O Mary, My Mother," and "The Ballad of Cowboy Jack." Every birthday in the family was a celebration because she baked a special cake, frosted/decorated, and served with ice cream for the occasion. Nottie loved to play cards, too, and would often initiate a game of "Euchre" or "Pitch" on long winter evenings. In later years, she joined the Sewing Circle in Westphalia, a group which met weekly. As the family grew, Nottie and Emil were able to get away now and then: a trip to California to see her sister, trips to Milwaukee to visit their daughter, and a trip abroad to see distant relatives. Later, they traveled, as back-seat passengers, across the country to view the sites and visit family. Nottie and Emil celebrated their 60th wedding anniversary September 27, 1997. Emil died on May 9, 1998. Nottie continued living on the family farm, but spent several winters in North Dakota with her daughter and son-in-law. In 2014, she moved to Westphalia into what used to be her mother's little house. In May 2017, Nottie entered Little Flower Haven in Earling. Her family was always her life, and she loved having them come to see her. She often mused that in her many years of having children, she raised three families: in the forties, in the fifties, and in the sixties. When the Little Flower Haven closed in the fall of 2019, Nottie was relocated to Elm Crest Retirement Home in Harlan. Nottie is survived by her children: June (Tony) Prom of Harvey, ND; Jerry (Sue) Gross, Westphalia; Father Ken Gross, Des Moines; Joe (Mary) Gross, Donahue; Bonnie McCoy, Des Moines; Andrew (Denise) Gross, Des Moines; Therese (Steve) Becker, Storm Lake; Ed (Leslie) Gross, St. Paul, MN; Paul Gross, Atlantic; Rose Wignall, Creston; Norm (Diane) Gross, Spring Valley, MN; thirty-seven grandchildren and 51 great-grandchildren; sisters: Lavina Gross and Alice Wegner, Harlan; sister-in-law Naomi Gross, Harlan; many nieces and nephews. Nottie was preceded in death by her husband, Emil, oldest child, Patricia in 2008 and youngest child, Nicholas in 2019; grandchildren, Kevin Gross and Laura Gross; brothers: Tony, Al, Gus, Jerome Kaufman, and two as infants; sisters: Frances Foxhoven, Marie Monahan, and Geraldine Dixon. For Services *Social Distancing Seating and Face Masks are Highly Reccomended Video Streaming of the Mass Service will be attempted, broadcast link will be available on the home page.

Aquinata Theresa (Kaufman) Gross, 100, was born October 29, 1919 to August and Mary (Schneider) Kaufman at her rural home near Westphalia, Iowa. The eighth of twelve children, she was named after her paternal aunt, Sister Aquinata OSF, of Campbellsport,... View Obituary & Service Information

The family of Aquinata T. Gross created this Life Tributes page to make it easy to share your memories.

Send flowers to the Gross family.