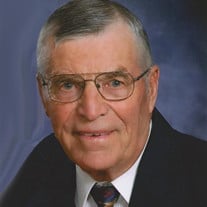 Anthony Leo Reinig (Tony) began his journey of life on January 10, 1922. He died peacefully in his sleep on August 6th, 2021 at the age of 99 years, 6 months, and 27 days. He was the son of August and Mary Kenkel Reinig and was the oldest son in a family of 11 children. Tony began his career as a boy helping his dad on the farm in Panama IA. He left school after 8th grade to devote more time to his family and developed a passion for farming that carried throughout his lifetime. He started farming with horses and yet was able to adapt to the technology used today. Tony was 18 when his family moved to Portsmouth IA. That is where he met and married the love of his life, Mildred Leinen, on May 5th, 1943. Tony & Mildred were blessed with eleven children and 74 yrs of marriage; they set a great example of the love and respect that marriage demands. He was a member of St. Mary’s Church in Portsmouth IA where he was one of two trustees for 30 years. During that time he was instrumental in building the Church and Parish Hall. He was a member of the Knights of Columbus. Upon his retirement from farming in 1985, Tony & Mildred moved to Harlan and became members of St. Michael’s Church. Any given day, you could find them at Burger King for breakfast with their friends. Tony was one of the first members of the Health Center in the basement of the hospital and later the Wellness Center. He took fitness classes and walked the track until he was in his 90's. Tony was a skilled carpenter and craftsman, always willing to help anyone in need. There was no project too big or too small for him. You always knew that when he said “What a guy oughta do”, it meant hard work and a job done right. Loving & strong, with a inquisitive mind, Tony was a man of integrity and generosity of self. He will be missed by everyone whose life he touched. Tony was preceded in death by his wife Mildred, their infant children: twins Peter & Paul, Bonnie and Anthony. His Son-In-Law Bob Gaeta, Great Grandchildren Abigail Whitford and Lucy Debrick. Siblings Rita, Robert, Joseph, Alvin, Theresa, Mary, Cecilia, Catherine, Alfred, Donald, Rose Mary, and Augustine. Left to cherish Tony’s Memory are his children: Dolores Gaeta of Plattsmouth NE, Rose Ann (John) Cannella of Omaha NE, Mary (Doug) Baker of Harlan IA, Judy (Leo) Hensley of Winterset IA, Susan (Chuck) Field of Santee SC, Joan (Tom) Ouren of Harlan, IA, Allan (Jackie) Reinig of Portsmouth IA; 21 Grandchildren; 35 Great- Grandchildren; and 1 Great-Great-Grandchild.

Anthony Leo Reinig (Tony) began his journey of life on January 10, 1922. He died peacefully in his sleep on August 6th, 2021 at the age of 99 years, 6 months, and 27 days. He was the son of August and Mary Kenkel Reinig and was the oldest... View Obituary & Service Information

The family of Anthony L. Reinig created this Life Tributes page to make it easy to share your memories.