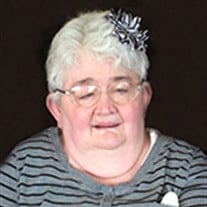 Angela Therese Gaul was born the Sunday afternoon of March 15, 1936, at the farm home of her parents, John A. Gaul and Odelia (nee Schnuettgen) Gaul, about three miles southeast of Earling, Iowa. She was her parents' ninth child and fourth daughter. She lived with her parents and siblings at that farm home till 1951, when she and her parents moved to a home in Earling. After her mother died, Angie made her home with her brother Cyril and his wife Angela until March of 1977, at which time she became a resident of the Shelby County Care Center south of Harlan. Angie attended the school operated by Concerned, Inc.at Harlan. In December 2003, Angie began living at the Little Flower Haven in Earling. She was much loved by all her family and by those who came to know her at the places where she lived. She was a resident at Little Flower Haven until its closure in October 2019. At that time, she moved to the Avoca Specialty Care facility where she resided since. She passed away peacefully at Myrtue Memorial Hospital on September 14, 2021. Angie's funeral will be held at St. Joseph's Church in Earling. She will be buried with her parents at St. Joseph's Cemetery in Earling. Angie is survived by her brother, Dewie, of Sioux City, Iowa and by one sister-in-law, Ann Gaul of Omaha, Neb. Also surviving are sixteen nieces: Claudia Connolly of Council Bluffs, Iowa, Maribeth Zimmerman of Westphalia, Rita Macaulay of Omaha, Sister Jodelle Zimmerman, O.S.B., of Yankton, S.D., Carla Gaul and Ann Gaul, both of Omaha, Mary Tepe of Harlan, Gina Gaul of Lincoln, Neb., Karen Gaul, of Des Moines, Iowa, Michele Wetzstein of Logan, Iowa, Kathy Andreasen of Omaha, Bunnee Butterfield of Edmonds, Wash., Billie Butterfield of Seattle, Wash., Jackie Charbel of Eagan, Minn. Sandy Gaul, of Dubuque, Iowa, and Laurie Crisler, of Arlington, SD. She is also survived by seventeen nephews: Jim Gaul, of Earling, Rae Zimmerman, Paul Zimmerman, and Phil Zimmerman, all of Westphalia, Mike Gaul and Donald Gaul, both of Earling, Joe Gaul of Earlham, Iowa, Jay Marshall, of Omaha, Gene Gaul, of Walnut, Iowa, Dr. Bryon Gaul, of Spirit Lake, Iowa, David Gaul, of Earling, Thomas Gaul, of Des Moines, Robert Gaul, of Vonore, Tenn., Randal Gaul, of Sioux City, Scott Gaul of La Vista, Neb., Lee Gaul, of Algonquin, Ill., and Chris Gaul, of Thornton, Col. Angie was preceded in death by her mother on 24 July 1963, by her father on 16 Feb 1965, by her brother Cyril on 19 Jan 1997, by her sister Valerie Zimmerman on 20 Oct 2010, by her brother Roman on 19 Oct 2006, by her sister Marian Marshall on 12 June 2014, by her sister Colette Butterfield on 1 July 2012, by her brother Verner on 11 Jan 2015, and by her brother John on 1 Jan 2013, as well by her brother-in-law Barney Zimmerman on 10 Feb 2011, by her sister-in-law Mildred (nee Rau) Gaul on 24 Jan 2011, by her brother-in-law Ray Marshall on,3 Mar 1999, by her brother-in-law Glen Butterfield on 5 July 1986, by her sister-in-law Betty (nee Zimmerman) Gaul on 26 Dec 2014, and by her sister-in law Mavis(nee Cwach) Gaul on 14 Mar 2012, and sister-in-law Angela (nee Schmid) Gaul on 27 Dec 2016. Also preceding her in death were four nephews, Thomas Zimmerman on 26 Sept 1955, and Mark Gaul on 26 March 2014, Garry Gaul on 2 Aug 2016, John Zimmerman on 15 Jan 2020, a niece, Gerarda Gaul on 2 Mar 1953, and great-niece Kathy Gaul on 24 June 2018.

Angela Therese Gaul was born the Sunday afternoon of March 15, 1936, at the farm home of her parents, John A. Gaul and Odelia (nee Schnuettgen) Gaul, about three miles southeast of Earling, Iowa. She was her parents' ninth child and fourth... View Obituary & Service Information

The family of Angela T. Gaul created this Life Tributes page to make it easy to share your memories.

Angela Therese Gaul was born the Sunday afternoon of March 15,...

Send flowers to the Gaul family.