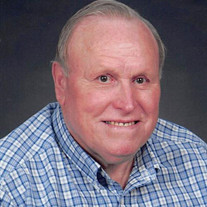 Amond Gary Ohms, son of Henry and Minnie (Christensen) Ohms, was born January 1, 1931 at their home in Omaha. He graduated from Technical High School in January 1949, then worked on his aunt and uncle's farm near Jacksonville, Iowa. He enlisted in the U.S. Navy in March 1951 and served aboard the USS Calvert as a machinist mate for 3 ½ years before his honorable discharge in March 1955. After that, he earned his license as a 3rd Grade stationary engineer and worked briefly at Omaha National Bank. On February 17, 1957, Amond and Norma Jean Sorensen were married at Bethany Lutheran Church near Kimballton, Iowa. After their marriage, they farmed near Kirkman, Iowa for three years, then in Fairview Township near Corley, Iowa for nine years. They farmed briefly in Pottawattamie County, Iowa before purchasing a farm in Shelby County east of Corley in December 1969. Amond and Norma Jean were parents of three children, Neil, Diane and Lori. Norma Jean died in a farm accident on December 10, 1981. On August 12, 1984, Amond married DeLores Ruwe at Immanuel Lutheran Church in Harlan, Iowa. They made their home on the farm until moving to Harlan in 1991. During his retirement, he shuttled cars for Hertz and delivered flowers to Hy-Vee Food Stores for Floral Distributing Inc. After several moves, they built a lake home near Bennington. DeLores passed away in December 2009. Amond continued to enjoy his lakefront home until recently, when he moved to an apartment in Omaha. He passed away at his home on Sunday, June 28, 2020 after a brief illness. Amond was preceded in death by his parents; wives Norma Jean and DeLores; sister Jeanne Ohms; sister Eunice Bequette; brothers-in-law David and Steven Rasmussen; and other relatives. His is survived by son Neil (Melanie) of Harlan, Iowa; daughter Diane (Tim) Johnson of Council Bluffs, Iowa; daughter Lori (Kevin) Bayne of Omaha, Nebraska; grandchildren Daniel Ohms, Nathan Ohms and Leah Johnson; sister Verda Johnson of Elk Horn, Iowa; sister-in-law Marian Froker of Exira, Iowa; brother-in-law Robert (Nerita) Sorensen of Walnut, Iowa; and other relatives and friends. He is also survived by stepchildren Chris (LuAnn) Ruwe of Hooper, Nebraska; Sheryl (Gary) Denison of Blair, Nebraska; Mark (Becky) Ruwe of Hooper, Nebraska; nine step grandchildren; and many step great-grandchildren. He is also survived by brothers-in-law Roland Rasmussen of Blair, Nebraska, and Dan Rasmussen of Oakland, Nebraska.

Amond Gary Ohms, son of Henry and Minnie (Christensen) Ohms, was born January 1, 1931 at their home in Omaha. He graduated from Technical High School in January 1949, then worked on his aunt and uncle's farm near Jacksonville, Iowa. He enlisted... View Obituary & Service Information

The family of Amond Gary Ohms created this Life Tributes page to make it easy to share your memories.

Send flowers to the Ohms family.