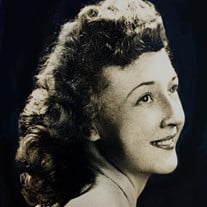 Alvina V. Lanz was born November 27, 1919, in Menno, South Dakota, to Theodore and Mary (Waldner) Donner. At a young age, Alivina moved to Harrold where she attended grade school. She later moved to Blunt, South Dakota, working at a boarding house to attend high school there, graduating in 1938 as salutatorian of her class as well as being a coach and player for the town’s baseball team. After completing business college in Minneapolis, she accepted a secretarial position at Rath Packing Company in Waterloo, Iowa. On July 5, 1947, Alvina married Frederick W. Lanz, a marriage that lasted 71 years until Fred’s death in June 2019. They were blessed with five children, Linda, Carol, Peggy, Fred, and Donna. In 1962 the family moved to Denison, Iowa, where Alvina took pride in being a full time homemaker as well as being an active member of the Denison United Methodist Church teaching Sunday School and being involved in the ladies’ circle groups. Alvina was also active in her children’s lives volunteering as a leader for both the boys’ and the girls’ scout troops, being a room mother for the school system multiple years, and working with the high school AFS program. She was a faithful wife, always by her husband’s side enjoying dancing, meeting for coffee, dining out, and especially traveling after Fred’s retirement. She enjoyed baking, playing bridge, and reading. Up until her death, she could still be heard reading aloud to the residents of Memory Lane at Eventide Lutheran Home. Alvina cherished visits with her grandchildren, and they filled her with a special joy. Alvina passed away at Eventide in Denison, Iowa, on October 23, at the age of 99 years, 10 months, and 26 days. She is preceded in death by her mother, Mary (Waldner) Donner, her father, Ted Donner, her brothers Ellis, Orville, Lester Donner, her sisters Hertha Schmidt, Irene Wipf, Viola Wipf, and an infant granddaughter, Elizabeth Koch. She is survived by one sister Gladys (Ben) Butler of Litchfield Park, Arizona. Left to cherish her memory are her children Linda (Lou) Pohlenz of Gilbert, Arizona, Carol Birchfield of Rockford, Illinois, Peggy Wheat of Frisco, Texas, Fred Lanz of Berkeley, California, and Donna (Tom) Koch of Denison; grandchildren, Courtney (Sarah) Monedero, Matthew Monedero, Jennifer (Josh) Goode, Jared (Kathryn) Koch, Nathan (Kaylie) Koch, and Rachel Koch and fiance’ Ryan Tegtmeier; six great-grandchildren, Darius and Lydia Monedero, Finnegan and Maddox Goode, and Addison and Camryn Koch; sisters-in-law Lauraine (Larry) Baker of Waterloo, Iowa, and Bernice Kirkpatrick of St. Paul, Minnesota.

The family of Alvina Vivian Lanz created this Life Tributes page to make it easy to share your memories.

Send flowers to the Lanz family.