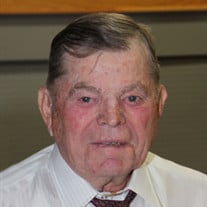 Alvin Hubert Reinig was born June 5, 1925, in a farmhouse east of Panama, Iowa. He was the fifth of thirteen children born to August and Mary (Kenkel) Reinig. There was one faucet with cold running water into the house which was a “big thing at the time.” In 1937, Al’s father bought his first tractor. Until then, all the farming was done with horses. Al attended Panama’s Catholic school through the ninth grade. When his family moved to a farm west of Portsmouth in 1941 and he was 16 years old, he quit school. He remembered milking cows and hitching horses in early morning darkness by the light of a gas lantern. Al was 21 years old in 1946 when electricity was finally installed at their Portsmouth farm home. In 1947, Millie Buman had graduated from the Tennant, Iowa, high school and was starting nurses training in Omaha when she and Al met. Millie and her brother were headed to a dance when they stopped in Portsmouth to pick up Al and two others, and it was the beginning of a lifelong relationship. Millie was not allowed to be married while in nurse’s training, so they remained engaged for an extended period. Although you could be engaged, you were not allowed to wear your engagement ring while on nursing duty, a rule which Millie defied and faced possible expulsion for. Al and Millie were married on December 30, 1950, on the second floor of St. Mary’s Catholic School in Portsmouth, Iowa. Six weeks later, Al was inducted into the Army and went to Camp Carson in Colorado. Al stole occasional weekends home to see his bride, sometimes without permission. On October 10, 1951, Al received a telegram from Millie that his first daughter had been born the previous day. While in the Army, he sent $100 a month home to his wife and daughter and kept the balance of his pay ($30) to live on. In 1953, Al was honorably discharged and returned to Iowa and his young family to farm. He would carry a copy of his military discharge form in his wallet for the rest of his life. In 1959, Al and Millie moved their growing family to a farm north of Portsmouth that they had purchased. They would live there for the next 33 years, working, praying, and raising their family. They were active members of St. Mary’s Catholic Church and the American Legion in Portsmouth. Al retired from farming in 1987, and in 1992 he and Millie moved to Harlan and joined St. Michael’s parish. Al died on November 22, 2020, in Harlan, Iowa. He will be lovingly remembered for his devotion to his family, his faith, his patience, and his sense of humor which only increased with age. Due to Covid restrictions and concerns, a private funeral mass will be held with only children and grandchildren present. He is preceded in death by his parents August and Mary (Kenkel) Reinig and by 10 of his siblings: Rita Ohlinger, Bob Reinig, Joe Reinig, Therese Krupicka, Mary Slaven, Catherine Schomers, Fritz Reinig, Rose Mary Reinig (infant), Don Reinig, and Augustine Reinig (infant). He is survived by his loving wife of 69 years and 11 months, Millie (Buman) Reinig; by his 5 children: Theresa (James, deceased) Caffrey of Omaha, NE; Patricia (Paul) Koffron of Tiffin, IA; Thomas (Denise) Reinig of Portsmouth, IA; Karen (Jerry) Bexten of Omaha, NE; and Janet (Jody Ruckman) Reinig of Omaha, NE; brother Tony Reinig of Harlan, IA; sister Cecilia Tunnell of California; and by 13 grandchildren and 14 great grandchildren. In lieu of flowers family suggests memorial be made to Portsmouth American Legion.

Alvin Hubert Reinig was born June 5, 1925, in a farmhouse east of Panama, Iowa. He was the fifth of thirteen children born to August and Mary (Kenkel) Reinig. There was one faucet with cold running water into the house which was a &#8220;big... View Obituary & Service Information

The family of Alvin Reinig created this Life Tributes page to make it easy to share your memories.