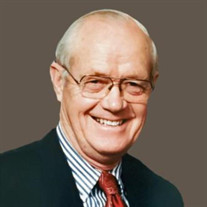 December 5th, 1928 – September 11th, 2020 On Friday, September 11th, 2020, Albert “Bud” Francis Wiuff, Jr., loving father, grandfather, and great grandfather, returned to his heavenly home at the age of 91. His devotion to his family, and his firmly held belief in the love of Jesus Christ, gave him peace. Bud was born on December 5th, 1928 in Nerstrand, Minnesota to Reverend Albert and Frances Wiuff (Olson). He was immersed in the Christian community that would be his support from an early age. When he was 14-years-old, he drove a school bus in his childhood community. In 1948, he married Betty Cox and had twin boys, Bruce and Bryan. Betty died shortly after their birth. In 1952 Bud married Betty Knudsen. His business interests moved him from Harlan to Ankeny, Iowa, and he started Elview Construction Inc. which completed many commercial buildings throughout the Midwest. In 2001, Bud “unofficially” retired; however, he never stopped pursuing entrepreneurial opportunities. Bud was blessed with a large and loving family. He often said, “Family. What a neat idea God had.” He and his wife, Betty (Knudsen) raised three children with patience, discipline, and humility. From the very beginning, he dedicated his children, grandchildren, and great-grandchildren to God and encouraged them to explore the beauty of the Scriptures. Bud began a lifetime pursuit of Scripture memorization and Christian discipleship after he was challenged by a friend in the early 1950s. His involvement with the Navigators, an organization that also focuses on Christian discipleship through Bible memorization, Bible study, and accountability to other Christians, gave him opportunities to hold couples conferences in the midwest and at the Navigators’ headquarters in Colorado Springs, Colorado. Bud was also involved in the Iowa Governor's Prayer Breakfasts by helping with guest speakers and praying with other Christian leaders for the State and the Nation. He had a passionate thirst for Scripture memorization and was a teacher to many. He was kind and loving. “Life is an Adventure,” is another phrase he used often and he lived his life to reflect that. From airplanes to motorcycles to world travel, his life truly was an adventure--from start to finish. He is dearly missed by his loved ones who celebrate the fact that he is at peace with his Creator. Bud is survived by his wife, Betty of 68 years; 3 children, Bruce (Phyllis) Wiuff of McKinney, TX, Bryan (Bev) Wiuff of Johnston, IA, Beth Wiuff of Ankeny, IA; 8 grandchildren, Eric Wiuff of Nashville, TN, April (Jeff) Propst of Abilene, TX, Robert (Alissa) Wiuff of McKinney, TX, Nathan (Stasia) Wiuff of Anna, TX, Ben (Rachel) Wiuff of Shawnee, KS, Brett (Sara) Wiuff of Manson, IA, Brina (Casey) Coppi of Des Moines, IA, Brooke (Dan) Shea of Ames, IA; 19 great-grandchildren. Bud was preceded in death by his parents Rev. Albert and Frances Wiuff, his first wife Betty (Cox) Wiuff mother to Bruce and Bryan, his brother Palmer Wiuff, and his sisters Marian Nelson, Lois Bartelson, and Irene Norgaard. A celebration of life will be held on Friday, September 18th, 2020, at 3 p.m. at Ankeny Evangelical Free Church with Pastor Todd Hessel. Following the service there will be a gathering in the outdoor courtyard. The interment will be private. Pauley Jones Funeral Home located in Harlan, Iowa (712)755-3135 Thank you to MercyOne Hospice Care for the compassion shown to Bud and the family. Memorial contributions can be directed to the family and a memorial will be decided at a later date. One of the last things Bud shared was “John 17:22… ‘The glory that you have given me I have given them, so that they may be one, as we are one.’ I’ve been asking myself, what is this glory? It is love.”

The family of Albert Francis Wiuff created this Life Tributes page to make it easy to share your memories.

Send flowers to the Wiuff family.