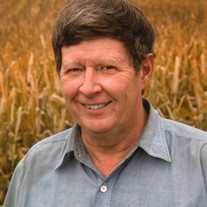 Albert James Carlson, son of Albert and Mabel Carlson, was born January 7, 1944, in Harlan, Iowa. He grew up on farms in Shelby County and Audubon County, graduating from Audubon High School in 1962. James enlisted and served in the Army National Guard during the Vietnam War. Before the service, he had dreamed of having a mechanic shop. However, when returning from the service, his parents were happy he decided to farm near Kirkman. The pull to farm was strong, and James loved farming. As farming calls for lots of machinery maintenance and he had wanted to be a mechanic before, this was the perfect fit. James enjoyed several cars during life: a Pontiac Catalina, a Pontiac GTO, a Corvette, and a Pontiac Fiero. He enjoyed taking the Fiero to car shows for others to enjoy. He also built a dune buggy on a Volkswagen base. James was baptized and attended church regularly at Redline Church of Christ. On January 14, 1978, James married Rosalie Dahlof at Redline in the Church of Christ. Throughout the years James served 10 years on the Shelby County Extension Council. He decided to learn to fly and enjoyed nothing more than taking a plane up. One year he flew son Aaron to 4-H camp near Decorah in Northeast Iowa. Rosalie's family and the Boom family from Wisconsin began a family tradition of trail riding with horses in South Dakota. Ella and Aaron were fortunate to go with grandma and grandpa alternately to join the fun. One year, James made a special trip to Fort Worth, Texas to collect Ella from the American Junior Quarter Horse Association World Show so he could deliver her to The Black Hills in South Dakota in time to enjoy trail riding. The first time the whole family went together, James was a spectator and heard all the fun talk about the wildlife and scenery that were observed during the rides. The next year there was an extra horse each day so he braved himself to ride so he could see what everyone had been talking about. He enjoyed it so much that after that we had to make sure to have a quiet horse just for him to ride with the group. One year his sister, Bonnie, even trekked to South Dakota and rode with the family for a few days. James died Friday, September 6, 2019, in a motor vehicle accident north of Harlan, IA. He was 75 years, 7 months, and 6 days of age. James is survived by his wife Rosalie of Kirkman, Iowa; children Ella (Michael) Koch of Walnut, and Aaron Carlson of Kirkman, Iowa; and granddaughter Mikaela Koch, Walnut, Iowa. He is also survived by three sisters: Marilyn Davis, Storm Lake, Iowa; Carol (Karl) Nolin, Spencer, Iowa; Bonnie Nelsen, Adel, Iowa; and niece and nephews, cousins he enjoyed calling, and many friends. He was preceded in death by his parents.

Albert James Carlson, son of Albert and Mabel Carlson, was born January 7, 1944, in Harlan, Iowa. He grew up on farms in Shelby County and Audubon County, graduating from Audubon High School in 1962. James enlisted and served in the Army... View Obituary & Service Information

The family of Albert James Carlson created this Life Tributes page to make it easy to share your memories.

Send flowers to the Carlson family.