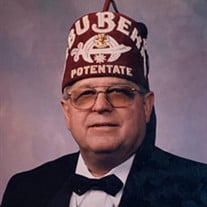 Alan L. Jensen was born to Sivert and Alice (Christensen) Jensen on the family farm near Manilla, Iowa on July 12, 1936. He died on August 19, 2019 after struggling with multiple illnesses for two years. Alan attended country school for four years before going to Manilla Public School, where he graduated in 1954. He entered the Army in January 1955 and served for three years, which were the only three years of his life not lived on his family's beloved farm. In addition to farming, he sold seed corn for many years, and even worked for Shelby County ASCS for a time. Alan was united in marriage to Janet A. Martens on September 15, 1956, at St. Paul's Lutheran Church in Irwin, Iowa where the couple has been lifelong members and where he served on the Church Council. As newlyweds, they lived in Petaluma, California, where Alan was a Morse Code Intercept Operator for the Army. They returned home to the family farm in January 1958 where Alan lived almost his entire life and farmed until retiring three years ago. He lived in the farmhouse that was built in 1913 by his grandfather, on the family's Century Farm that was established in 1898. In 1962 Alan became a Mason, as a member of the Sardius Lodge #444 in Irwin, Iowa. Alan served several terms as Master of the lodge. In 1971, he became a member of the York Rite Bodies of Harlan, Iowa and joined the Sioux City Scottish Rite Bodies in 1987. In 1990, Alan joined the Golden Leaf Lodge #595 in Manilla, Iowa, holding a dual membership with the Sardius Lodge. A proud Shriner, Alan joined the Abu Bekr Temple on May 12, 1971. He was a member of the West Central Iowa Animal Unit and served as the group's President on several occasions. He spearheaded the Vidalia onion fundraiser for the Unit. He was appointed to the Divan in 1990 by the late Fred Asher, who was Potentate at the time. Alan rose to serve as Potentate of the Abu Bekr Temple in 1999, and took his family and a group of his fellow Shriners on a cruise of the Caribbean. As part of his Shrine activities, he was also a member of Cabiri, Jesters, and Kachina Club, and represented Abu Bekr on the Iowa Shrine All-Star Football Board of Directors for many years, including a turn as President. For many years, including 2019, he made sure the fourth graders from Manilla, IKM, and IKM-Manning were given cotton candy on their annual trek to the Shrine Circus in Sioux City. He loved driving his pick-up all over the countryside to watch over his fields and crops-and everyone else's, to have coffee with his friends at ADM in Manilla, to play cards with his buddies in Defiance, and to socialize in the local establishments. He was the Parade Chairman in 1986 for the Manilla Centennial Celebration, and served on the Greeley Township Committee caring for the Aster Cemetery. For many years Alan was an avid bowler and cribbage player. In his later years, he loved taking Janet to watch their grandchildren participate in sports and other activities. Alan is survived by his wife of 62 years, Janet, his three daughters, Julie (Gary) Drees, Jill Jensen-Welch (John Kite), and Jeana Jensen-Hogue (Tim Hogue), his three grandchildren, Tim (Sarah) Welch, David Hogue, JaCee Hogue, his step-grandchild, Michelle Kite (Matt Bonsall) and his great-granddaughter, Isla Welch, brother-in-law, James (JoAnn) Martens and sister-in-law Judy Odom, as well as nieces, nephews, and cousins. He was preceded in death by his parents, parents in-law, Gilbert and Viola (Ohde) Martens, brothers, Robert Jensen and James Jensen, and sister-in-law, Myra (Weinbrandt) Jensen. Memorials can be directed to the Abu Bekr Shrine Transportation Fund, Box 3347, Sioux City, Iowa, 51102.

Alan L. Jensen was born to Sivert and Alice (Christensen) Jensen on the family farm near Manilla, Iowa on July 12, 1936. He died on August 19, 2019 after struggling with multiple illnesses for two years. Alan attended country school for... View Obituary & Service Information

The family of Alan "AJ" Jensen created this Life Tributes page to make it easy to share your memories.

Send flowers to the Jensen family.