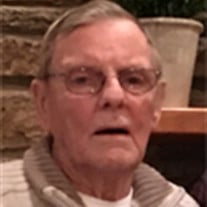 Alan “Skip” Benedict Carlsen, son of Floyd and Mildred (Benedict) Carlsen, was born April 14, 1938, in Omaha, Nebraska. He was baptized at Bethel Lutheran Church in Omaha. While growing up, Skip spent most of his childhood summers staying and helping on his aunt’s and uncles farms in rural Nebraska. He attended Omaha Central High School, where he graduated with the class of 1956. While in high school, Skip worked part time at the Omaha Stockyards penning cattle. On June 6, 1958, Skip was united in marriage to Jonne Schroeder in Yankton, South Dakota and made their home in Omaha. Three sons were born to this union: Scott, Jeff and Chris. Skip continued his passion of working with cattle working his way up to Cattle Buyer traveling around Nebraska and Iowa. He attended several seminars at Iowa State University, learning all he could about bovine genetics and knew that was the future in the cattle market. Alan and Jonne then made their home in the Jefferson and Scranton, Iowa areas and later in Minnesota and Harlan, Iowa where he sold “fat cattle”. Skip started his own cattle buying business, Carlsen Cattle Company, out of Harlan, Iowa buying and selling cattle taking him and his family throughout North and South Dakota and Montana. In November of 2018, Skip and Jonne returned to Harlan, Iowa where he still remained active in not just his job but his hobby of cattle buying. Skip died on Saturday, July 13, 2019 at Myrtue Medical Center in Harlan, attaining the age of eighty-one years, two months and twenty-nine days. In addition to his parents, Skip was preceded in death by his son Scott Carlsen. He is survived by his wife of sixty-one years Jonne Carlsen of Harlan, Iowa; sons Jeff Carlsen and his wife Rada of Crystal Lake, Illinois; Chris Carlsen and fiancé Kristin of Millard, Nebraska; 6 grandchildren: Elyse, Natalie, Jacob, Zach, Sam and Lexi; great grandson Liam Scott; brother Keith Carlsen and his wife Shirley of Bisbee, Arizona; nieces and nephews; other family members and many friends.

Alan &#8220;Skip&#8221; Benedict Carlsen, son of Floyd and Mildred (Benedict) Carlsen, was born April 14, 1938, in Omaha, Nebraska. He was baptized at Bethel Lutheran Church in Omaha. While growing up, Skip spent most of his childhood summers... View Obituary & Service Information

The family of Alan "Skip" Carlsen created this Life Tributes page to make it easy to share your memories.

Send flowers to the Carlsen family.