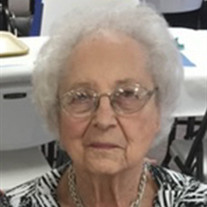 Agnes Irene (Klaus) Goodner passed away on a beautiful fall day at the Exira Care Center on Saturday, September 19, 2020. She was 94. She will be laid to rest at Harlan Cemetery beside her husband Max, who preceded her in death in 2013. Agnes was born on July 29, 1926, to Henry and Marie (Seils) Klaus in Ute, Iowa. She grew up on their farm and loved helping her dad outside. She attended school in Ute. Agnes was working in Denison, Iowa when she met her future husband on a blind date. They were united in marriage on January 4, 1948, at St. Paul Lutheran Church in Ute. Agnes and Max farmed near Tennant, Iowa, where they raised 4 children and created a lifetime of memories. They later moved to Harlan. Agnes was a proud and devoted wife, mother and grandmother. She loved to travel with family and then just Max in their later years. She enjoyed visiting with friends and neighbors and could often be found working in the yard as she enjoyed gardening and raising beautiful flowers on the farm and after they moved to town. She poured her love and personal touches into decorating her home. Agnes was always on the go and also stayed busy working at various businesses around Harlan through the years. She especially liked assisting at the flower shop. Agnes retired at 89 but had been assisting in a daycare before retirement, reading to and rocking children. Agnes was preceded in death by her husband, her parents, a brother Ervin, sisters and brothers-in-law; Esther (Charles) Behrendsen, Helen (Ray) Boettger, Leona (Phil) Goslar, Delores (Wayne) Stephenson. She is survived by her children: Ricky & Frances Goodner of Wildwood, GA, Glee & Jean Goodner of Cambridge, IA, Gail & Barbara Goodner of Carroll, IA, Karen & Bruce Hardy of Omaha, NE; a sister Lucille Kruse of Denison, IA, 8 grandchildren and 13 great-grandchildren, nieces and nephews, other family members and friends.

Agnes Irene (Klaus) Goodner passed away on a beautiful fall day at the Exira Care Center on Saturday, September 19, 2020. She was 94. She will be laid to rest at Harlan Cemetery beside her husband Max, who preceded her in death in 2013. Agnes... View Obituary & Service Information

The family of Agnes Goodner created this Life Tributes page to make it easy to share your memories.

Send flowers to the Goodner family.